At 10-12 seconds, the weak force and the electromagnetic force have just broken from the electroweak force in yet another phase transition. This marks the first time the universe is operating under all four fundamental forces as we know them today. The universe is about 1012 metres in diameter and it is filled with hot dense quark-gluon plasma. What is this plasma and where did it come from?

Quark-gluon plasma has recently been created in the lab by slamming nuclei together at extremely high speeds at Brookhaven RHIC, as shown in this brief video:

The properties of this plasma are being studied by physicists at CERN's Large Hadron Collider, and at other particle accelerators as well. This is a great breakthrough in particle physics as well as cosmology, but what exactly is this quark-gluon plasma? It is a plasma, a state of matter, similar to but different from solids, liquids and gases. Ordinary plasmas are made of atoms stripped of their electrons so they consist of positive ions (atomic nuclei) and free electrons. This plasma is different. Physicists call it an exotic plasma. It has no electrons. There are no electrons in the universe yet. There are no atomic nuclei yet either, just a sea of free quarks and gluons. These quarks are so energetic, they interact only weakly with the gluons. Inside an atom, which exists only at a far lower energy, gluons bind quarks together so strongly, you need a powerful collider to pry quarks apart. Quark-gluon plasma is the densest matter known, even denser than the inside of a neutron star. It is perfectly frictionless and exists as a gas at very energy and as a liquid at slightly lower energy.

Quarks are subatomic particles that make up the protons and neutrons inside a nucleus. Gluons are subatomic particles that mediate, or carry out, the strong force. Gluons act on a relatively larger scale by holding protons and neutrons together in the nucleus and on a smaller scale by holding the quarks inside each proton and neutron together, as shown in the  diagram of up and down quarks inside a proton below. 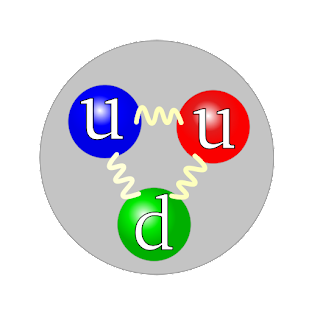 As the universe starts off this epoch, there are no protons or neutrons because the quarks are much too energetic to be confined inside them, even though gluons now exist and the strong force is operating through them. There are no atoms and no electrons. But, in this special plasma, we have the beginnings of matter. This nearly frictionless gas/liquid has some eerie similarities to matter at near absolute zero, called a Bose-Einstein condensate, which is also frictionless.

Quarks have mass. Gluons do as well, and theoretically they both acquire their mass through a force carrier particle called the Higgs boson, which is expected by now to have made its first appearance in the universe. This boson mediates a field called the Higgs field, which pervades the universe and gives mass to every particle that couples with it, including itself. Some theorists use the analogy of a pool of sticky honey through which otherwise massless particles travel, converting them into particles with mass some of which ultimately form atoms, for example. The Higgs boson, the most sought after particle in science, was recently discovered. As physicists begin to work on the properties of this newly discovered boson, we may begin to understand why matter has mass. The Higgs boson is the last particle of the Standard Model of particle physics to be discovered. What exactly is the Higgs boson? Try this Scientific American article to find out why it is so special.

Quark particles of matter decouple from the energy of the universe at about 100 MeV. This is a phase transition, or symmetry breaking, called the QCD phase transition. QCD stands for quantum chromodynamics. QCD matter is any number of theoretical phases of matter where degrees of freedom in the theory allow for various quarks, antiquarks and gluons. These phases of matter would only happen at far higher energy than what can be produced in any collider, but they should be present in the quark epoch universe. In ordinary matter, the strong force acts only at very short distances inside nuclei to hold quarks together but in these phases of matter, the strong force becomes the dominant operating force, operating all throughout the matter. This matter is believed to be unlike a gas or an ionized plasma - it should act more like a liquid instead.

Is matter simply the frozen energy of the universe, owing to Einstein's energy-mass equivalence (E = mc2)? Most physicists think this notion is wrong for three reasons. First, quantum particles that make up matter are not stationary but instead are in a constant state of flux. All particles of matter also have energy. Second, both energy and matter are composed of particles, which in the case of energy, can have mass or not, differing only in how strongly they interact with the Higgs field. This new information complicates our concept of what makes matter particles special. Third, every energy and matter particle, according to string theory, is a one-dimensional string, each with its own distinct vibration frequency. This makes the idea of matter as a special state seem irrelavent. If you take into account the latest theoretical physics, it might be better to think of matter more as an artifact of a complex web of interacting energy fields than as a set of one or more stationary or frozen particles.

The quark-epoch universe is unimaginably hot and dense. It continues to expand rapidly, though not at the incredible rate it did during inflation. The four fundamental forces have separated and matter is just beginning to appear - a stew buzzing with quarks and gluons. This epoch ends at about 10-6 seconds, when the energy of the universe falls below the binding energy of protons and neutrons. But that's not all. Matter has a twin, antimatter, which is simultaneously making its debut on the universal stage, and this presents physicists with yet another puzzle to work on, as we will see next, with The Hadron Epoch.
Posted by Gale Martha at 1:48 PM