Our Universe Part 12: The Dark Age

A blast of gamma radiation was released as the photons decoupled from matter. This blast is detectable as cosmic background radiation. What follows, however, is a dark age that lasts until the first cloud of mostly hydrogen gas collapses gravitationally and begins to emit light, roughly 150 million years later. Meanwhile, dark matter is believed to be organizing into a universal scaffold on which matter will soon accumulate. Physicists believe that the first baryonic matter in the universe was too energetic and was under too much pressure left over from the Big Bang to collapse and form stars. They believe that dark matter, combined with a process called Jeans instability, was responsible for causing the first clouds of gas to collapse. Jeans instability works like this: A cloud of gas will remain stable as long as its (outward) internal pressure is equal to the (inward) force of gravitational attraction on its particles. As its internal pressure falls, it becomes unstable and even a tiny perturbation will trigger its collapse. The gravitational effect of abundant dark matter is believed to help overcome the internal pressure of the gas before it becomes too dispersed to collapse on its own. No one knows yet what dark matter is made of and, therefore, exactly when it first appears in the universe but most physicists believe it was present early enough to help draw baryonic matter in along its scaffold. This theory agrees with a dark matter prediction of the structure of the cosmic background radiation and it corresponds with the visible structure present in the universe today. Below is a 3-D map of the large scale distribution of dark matter in the universe, detected by measurements of weak gravitational lensing using the Hubble Space Telescope. 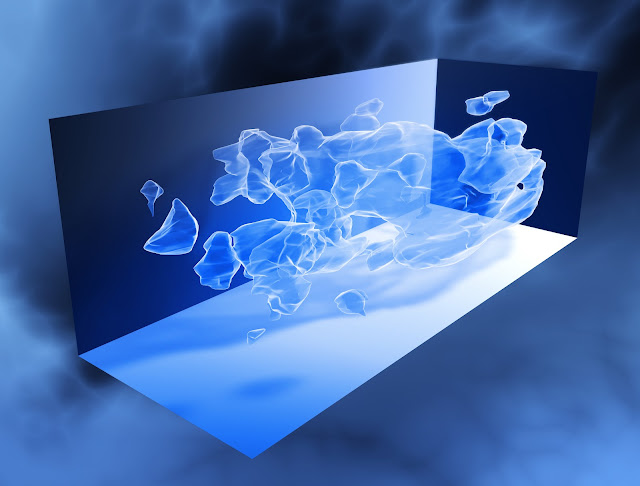 Meanwhile, atoms of hydrogen begin to attract each other, forming much more stable hydrogen (H2) gas. Clouds of molecular hydrogen gas begin to collapse under their own gravity. The environment is still hazy. When decoupling began, the universe did not instantly become transparent. The first stars shine through a slowly thinning plasma fog, during which dark opaque regions will gradually become more and more interspersed with bubbles of light (forming stars) and transparent gas. This ten-minute video describes how the universe enters the dark age:

Electromagnetism had been dominating the universe because it was brimming with photons, but now gravity, by far the weakest of the fundamental forces, is taking over. It allows energy density now in the form of matter, to clump. This is an unusual example of a closed system moving away from both equilibrium and disorder. It seems to be breaking the second law of thermodynamics which states that all closed systems tend toward disorder and a state of equilibrium. Up until now, the universe maintained a fairly homogenous potential energy in terms of electric potential and matter. Now, forming stars are creating pockets of high energy density surrounded by areas of very low energy density. This appears to decrease the entropy of the universe. If you consider the long-term picture of the universe, does gravity hold the second law of thermodynamics at bay for a while or does gravity modify the law? Some theorists, considering the thermodynamics of the universe, suggest that the universe should eventually come around to obey the second law - it should succumb to heat death - a state in which there will no longer be any temperature differences or other processes that could be exploited to do work. This is an eventual return to a state of thermodynamic equilibrium, that would occur only after the last supermassive black hole evaporated away through Hawking radiation, a long time estimated to be about 10100 years. The universe, prior to the effects of gravity taking over, was in a state superficially similar to heat death - thermodynamic equilibrium.

Meanwhile, the universe has continued to expand. This expansion can be measured as the redshift of the cosmic background radiation. The concept of cosmological redshift was introduced in the previous article. At this point, it is helpful to describe the universe in terms of redshift. Cosmologists use redshift, z, to designate a cosmic epoch. 1 + z is the factor by which the universe has expanded from that epoch to present day. Present time z = 0. The value of z gets larger as you go back in time. It is the factor by which the wavelength of the photons emitted during the decoupling epoch has stretched. This is what gives us direct evidence for the expansion of the universe.

Atoms started to form at z = 1100. This occurred during the decoupling epoch when the temperature was around 4000 K. Soon afterward, cosmic radiation filled the universe with a red uniform glow of blackbody radiation. This black body radiation currently fills the universe with uniform microwave radiation. A black body is an object in physics that emits photons in a spectrum that is determined only by its temperature. The graph below shows how temperature is related to the colour and intensity of the emitted light. A white hot object glows white because its temperature is around 5000 K (our Sun is an example). A red-hot object is around 3000 K (the universe during the dark age). 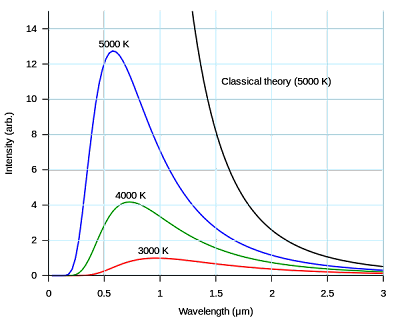 Some real objects are better black bodies than others, the universe is very good one. If you would like to know more about how black bodies work, try my article, Atoms Together Can Emit Light.

As the universe began this epoch at about 379,000 years old, it was opaque and almost uniformly filled with atomic gas. Now, during the dark age, a tiny fraction of this gas forms the first small molecules, most of which is hydrogen (H2) gas. The temperature continues to drop as the universe expands and the cosmic radiation shifts to infrared. To human eyes, the universe would now appear completely dark.  It begins a while after decoupling occurs when the universe is around a million years old and it lasts for a long time, up to 200 million years, until the formation of the first stars. Galaxies and quasars have been observed up to z = 6.5 (the universe being about 500 million years old) so stars must have formed well before this, possibly at redshift as high as 18, about 150 million years after the Big Bang. Very faint objects in higher z time frames will probably be observed as technology improves.

It's hard to pinpoint exactly when the first star forms because the universe at this time is filled with random tiny primordial density fluctuations of gas and dark matter, but eventually at some random location in the universe (and likely at around 2000 K), a fluctuation in the density field will be large enough to trigger the gravitational collapse of a molecular gas cloud and eventually form a central core composed of compressed hydrogen gas. It will continue to collapse under the force of gravity. It will become hot and bright because of the energy generated by this contraction, and it will begin to spin, thanks to sum of the angular momentum of every atom involved. It will eventually grow hot enough to fuse hydrogen into helium at which point fusion begins and a star ignites, at around z = 18 (around 150 million years post-bang. This age marks the beginning of a universe filled with countless billions of stars, next, in the Stelliferous Era.
Posted by Gale Martha at 6:31 PM