The universe cools enough to allow free electrons to bind to nuclei and the first atoms appear. This decoupling process allows bound-up photons to stream and we can see those first streaming photons today as a map of cosmic background radiation, a first real image of the young universe that's taken almost 14 billion years to reach us.


All the forces are in place and acting on atoms of matter as they form. The universe is well on its way to becoming the star-filled vastness we are familiar with.

A tremendous number of processes, many of which are very complex and still not well understood, have taken place to reach this epoch, from the first appearance of each fundamental force to the explosion of quarks, electrons and their antimatter twin particles. This processes reveal the fundamental nature of our current universe. We can now see how at least three of the four fundamental forces - strong, weak and electromagnetic - are very closely related to each other. In fact, they are all aspects of one single force and at high enough energy, they revert to one force. Phase changes took place as the universe cooled from its Big Bang origin, breaking various kinds of symmetry built into the fabric of the universe. These phase changes broke the single force into the different fundamental forces of our current universe. Quarks, the building blocks of protons and neutrons in atomic nuclei, first appeared as the result of yet another phase change, in which these particles decoupled from energy. Electrons, the other building blocks of atoms, decoupled from energy as well. This tells us something profound: All atoms of matter and all the different forces that act upon them, which seem so so clearly distinct from one another, are really different aspects of a single entity. They appear and behave as distinct entities only at energies that are sufficiently low.

By about 10,000 years after the Big Bang, the energy density of photons had fallen below the energy density of matter. Before this, the energy density of the universe was dominated by photon radiation, as the result of matter/antimatter annihilation. Some of those photons have since converted into particles of matter, but most of the loss of energy is in the photons themselves. Their wavelength has been stretching as the universe expands, reducing their energy. The universe is now about 379,000 years old. It has expanded to about a thousandth of its present size and it has cooled to about 4000 K. The universe has been seeded with matter but clumps of matter cannot yet collapse under their own gravity to begin to make any structure (stars, gas clouds etc.) until photons decouple from it.

The lower-case y-like symbol is the Greek letter gamma, and it stands for a photon of gamma radiation. This ionization energy corresponds to a photon temperature of 4000 K or an energy of 13.6 eV (electron volts). Below 4000 K, the reaction can no longer support photon absorption and the nuclei irreversibly bind with electrons to create neutral atoms. At this point, photons are freed from the reaction and permitted to stream as highly energetic gamma rays. Atoms make their first appearance and the universe gradually becomes transparent.

Photons from this epoch have been traveling for almost 14 billion years. We have detected them here on Earth as cosmic microwave background radiation. The radiation that fills the universe today has been mapped and that map reveals subtle irregularities that correspond with what physicists would expect from quantum fluctuations of energy in what was once a very tiny space. Those tiny fluctuations have expanded to large-scale regions of varying energy density. The different colours in the cosmic radiation map of the universe below represent very minute variations in temperature, of around +/- 0.0002 K. 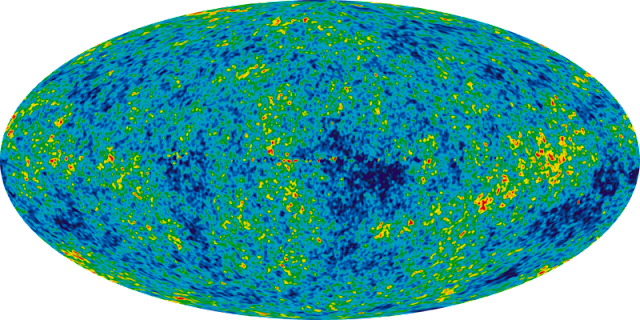 Over almost 14 billion years, the temperature of these original photons has decreased from 4000 K to 2.725 K, a factor of about 1100. This cooling off is not the same kind of cooling that happens when a cup of hot coffee gradually cools to room temperature. It is the sole result of the expansion of the universe, not through heat transfer, because there is nothing the photon energy can transfer to inside the vacuum of space. A photon's energy is measured by its wavelength. As the energy of a photon drops, its wavelength increases. Gamma photons have a very short wavelength and tremendous energy. Microwave photons photons have much less energy and a very long wavelength, as shown below. 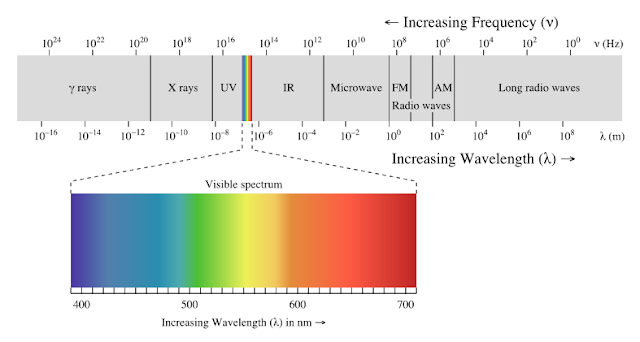 The expansion of spacetime caused the energy of the photons to redshift - the photon's wavelengths stretched out in other words and that caused their energy, measured as temperature, to fall so that now they fall into the microwave region of the electromagnetic spectrum. This 11-minute video explains how cosmological redshift works:

This radiation was discovered accidentally in 1965 by two researchers, Arno Penzias and Bob Wilson, trying to detect faint radio waves bounced off of satellites. Even after cleaning off pigeon droppings and eliminating all other possible sources of interference, they heard a continuous low mysterious hum, the sound of photons streaming ever since they were freed from matter, 379,000 years ago:

We are embedded in the Big Bang explosion. Photons released from that explosion bombard us from all directions.

At 379,000 years old, the first photons have begun to stream across the universe. Then, over the next 150 million years, everything gradually goes dark. Why? Find out in The Dark Age, next.
Posted by Gale Martha at 5:49 PM