The universe appears as a homogenous dark expanding space until this era begins with the ignition of the first star, punctuating the universe with light. Once this star-forming process starts, it ushers in a boom of star births and then black holes and galaxies and all the other structures and objects we see today. This is the era we live in and it stretches into the future until the last star dies.

Stelliferous means "filled with stars." This age begins when the universe is about 150 million years old and it will continue until about 100 trillion years from now when the last star forms, leaving all stellar objects from that point on to degenerate and decay.

The universe is now about 150 million years old and the first stars have just formed from collapsing halos of mostly hydrogen molecular gas. Watch this 1.5 minute video of star forming. It is a computer model based on a cloud of hydrogen (H2) gas fifty times more massive than our Sun, 1.2 light-years in diameter, and with a starting temperature of 10 K:

The first stars are likely to be at least as massive as this simulation suggests, perhaps closer to 100 solar masses or more. Star formation is an extremely violent process. These forming stars are drastically changing the environment in which they are formed and that's affecting the formation of subsequent stars.

The first stars are called Population III stars. Population III stars are a theoretical group of extremely massive hot stars that contain no elements except those made during the Big Bang. Heavier elements did not exist until much later on when these massive stars likely exploded as pair-instability supernovae at the end of their lifespans. These massive light-element stars grew so hot that gamma photons in the core favoured the production of electron-positron pairs, as shown below. 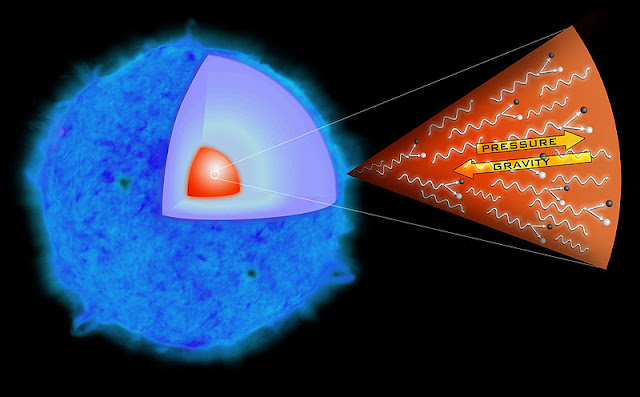 This would have reduced the core's pressure and led to a partial collapse of the star. It would have then led to a runaway thermonuclear explosion that would have torn the star apart, leaving nothing, not even a black hole behind.

Population III stars were hot massive stars containing no heavy elements. They would have burned very intensely, emitting intense ultraviolet light, which would have ionized the neutral hydrogen gas around them. They would have burned out rapidly, in the span of a few million years, ending their brief lives in intense supernovae blowing new heavier elements such as carbon, silicon, oxygen and iron into other collapsing gas clouds, seeding those forming stars with these new elements. This marks a trend in star composition. Older stars contain less heavy elements in them to start with, while newer younger stars are formed from a higher proportion of heavy elements. These stars are said to have a higher metallicity. All the elements heavier than hydrogen, helium and a tiny amount of lithium come from fusion reactions inside stars and from the debris left over after they die and explode. The stelliferous era is explored in this five-minute video:


Some researchers suspect that some population III stars may not have blown completely apart. They may instead have left remnant black holes after they exploded. These black holes could have clumped into more massive black holes, to form the first quasars and small galaxies.

Most if not all galaxies are believed to have black holes at their centres. They contain star systems, star clusters and interstellar gas. It is the interstellar gas that new stars are made from. At first, stars were made of only the lightest elements, those present in the gas, form. These are followed by stars made of heavier elements, as the earliest stars die and explode, seeding the interstellar medium with them. Eventually a galaxy runs out of star-forming gas, and becomes a collection of aging stars. Atomic matter, in the form of stars and gas, is only a small contribution to the makeup of any galaxy, however. Dark matter accounts for about 90% of the mass of galaxies. Our galaxy, the Milky Way, shown below, is a fairly old galaxy, about 13.2 billion years old. It is a barred spiral galaxy surrounded by a supermassive black hole called Sagittarius A*. 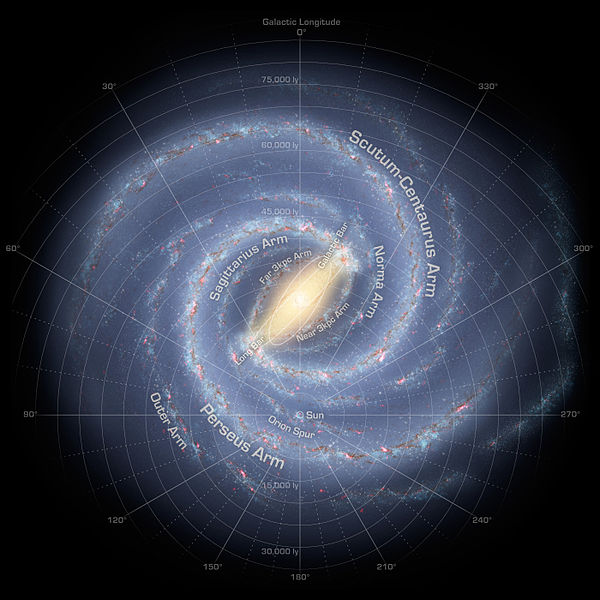 The Milky Way may contain up to 400 billion stars and more gas and dust in its arms than most galaxies do, especially ones this old. In fact, the Milky Way is still growing. Dust and gas is being accreted from two adjacent galaxies, the Large and Small Magellanic clouds.  New stars are being formed in the dusty gas-filled arms of the Milky Way, but this dust and gas will probably be exhausted in about five billion years. This puts the Milky Way in the green valley of the galaxy colour-magnetitude diagram, below. 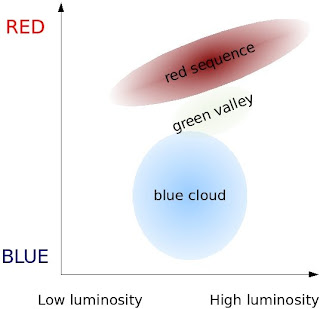 Spiral galaxies, with a few exceptions including our own, tend to be younger galaxies, or blue cloud galaxies while older galaxies tend to be elliptical in shape, or red sequence galaxies. Blue cloud galaxies tend to contain more young Population I stars while red sequence galaxies contain mostly older Population II stars. No population III stars have been observed. These stars are believed to be long extinct. However, there may be a way to indirectly "see" them. Below is an infrared NASA image taken by the Spitzer Space Telescope, in which all the stars, galaxies and artifacts have been masked out (grey). The remaining glow could be of the first (Population III) stars forming in the universe. NASA's James Webb Telescope will try to locate Population III stars. These star images, if they are found, will be of extremely distant long-dead stars. Remember, as you look far away into deep space you are looking backward in time.

Although the above image shows an infrared glow, the first stars shone very bright with a bluish cast, indicating their intense heat, shown in the artist's concept below. The wavelength light coming from the stars would have stretched as the universe expanded. 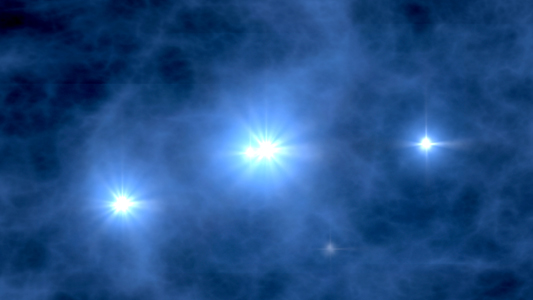 Hot stars like these would emit a lot of energetic ultraviolet photons that ionize gas, most of which is hydrogen, and this would create pockets of gas as hot as 10,000 K. This is the second phase change for hydrogen. The first change was recombination (or dionization) which occurred at redshift z = 1100 (the large z value indicates the size of the universe. At z = 1100 the universe was much smaller and very young). This first phase change occurred during the decoupling epoch, in which photons decoupled from matter. Recombination means that the plasma composed of electrically charged electrons and protons that filled the much younger universe combined to make electrically neutral hydrogen atoms. Now, high-energy ultraviolet photons emitted from the first stars energize hydrogen gas back into ionized plasma. This is called the reionization phase change. The ionized hydrogen gas at this stage is much less dense than when it was first ionized because the universe has continued to expand and Thomson scattering interactions are far less frequent. The universe, in this case, doesn't turn opaque, as it did during at the beginning of the dark age, but remains transparent instead.

These highly energized ions create shock waves that trigger molecular gas clouds in the region to collapse and it eventually leads to widely dispersed star formation throughout the early universe, ultimately leading to the massive array of galaxies and other objects we have in our universe today. In fact, most astrophysicists believe that galaxies formed very early in the life of the universe, at least by the time it was one billion years old, suggesting an extremely active period of star formation. The future locations and structures of galaxies might have been mapped out even before the first star formed. As the universe cooled, clumps of dark matter began to condense and within them clumps of gas began to condense. These pockets of higher dark matter/gas density could have become the seeds of future galaxies. These protogalaxies would have consisted of hydrogen and helium gases as well as dark matter. Soon after they formed, the first stars began to form within them from internal pockets of denser gas that eventually accrued enough mass to begin to form an accretion disk (I describe this process in more detail in the article, Introduction to Stars). The current distribution of galaxies in the universe is quite interesting. Rather than being evenly distributed, they are associated with what appears as giant cosmic filaments, where enormous clusters of galaxies form at the filament intersections. Processes that went on perhaps as early as the first epoch are imprinted on the distribution of galaxies we see today. They are the signature of tiny quantum fluctuations that once occurred billions of years ago, from this: 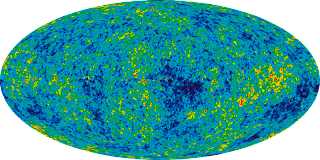 (Tiny fluctuations in temperature, shown in the cosmic microwave background radiation map above, suggest small fluctuations in the density of energy and matter in the universe when it was about 400,000 years old and the process of decoupling began.) 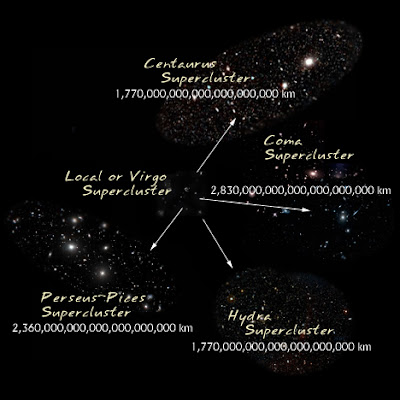 (The image above indicates how organized matter in the universe has become. It represents only a very small portion of the universe. The Milky Way is located in a region of galaxies organized into was is called called the Local or Virgo Supercluster)

Population II stars are the oldest extant stars in the universe. They contain a small proportion of elements heavier than hydrogen and helium,  such as oxygen, silicon and neon. These stars tend to be located in the outermost region of our galaxy, called the galactic halo, within clusters of stars called globular clusters. Population II stars are believed to contribute all the elements to the universe, except some of the very heavy unstable ones. The oldest star in our galaxy is HE 1523-0901, shown below as an artist's impression. 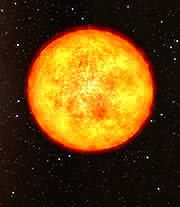 It is 7500 light years from Earth and is thought to be a second generation Population II star that is 13.2 billion years old and 0.8 solar mass. 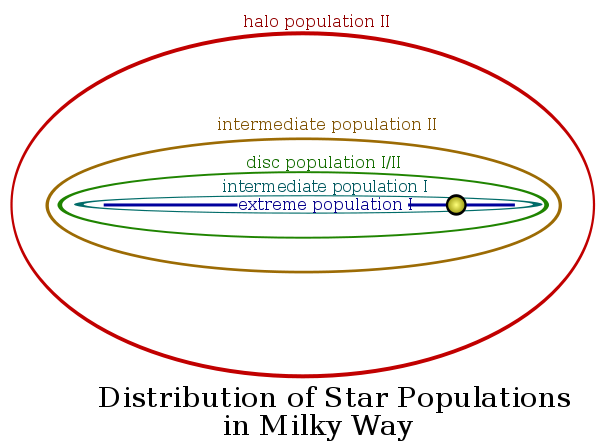 In another 81/2 billion years from the beginning of the stelliferous era, when the universe is about 9.5 billion years old, our Sun will begin to form, and a few million years after that, Earth will have formed from  dust in the Sun's protoplanetary disk. To learn more about stars, try my article "Introduction To Stars."

The diagram below gives you an idea of the timeline of the universe's evolution: 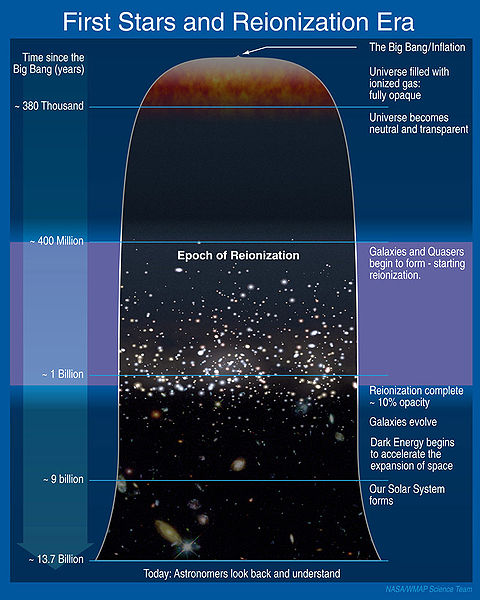 Along with Population I and II stars and dust clouds, the universe is now populated with magnetars, quark stars, neutron stars, black holes and quasars. These fascinating objects are explored in detail in the article series, "Stellar Objects."

How and when will the universe end? Scientists haven't reached a consensus yet on the fate of the universe but a number of theories will be explored in the next article, "The End of The Universe."
Posted by Gale Martha at 1:38 PM