The separation of the strong force releases an enormous amount of energy, enough to drive the exponential expansion of the very early universe.

At 10-36 seconds, the inflationary epoch begins as the strong fundamental force breaks from the weak and electromagnetic forces, which are still combined at this point into one force called the electroweak force.

The strong force, one of the four fundamental forces, is melded together with the electroweak force at temperatures above 1027 K, and this is the temperature at which the strong force begins to break from the electroweak force. It's occurring right now at 10-36 seconds. This temperature is many magnitudes higher than any temperature experimentally created in a lab (see Our Universe Part 3: Planck epoch), so the strong-electroweak phase transition is currently impossible to experimentally verify. The strong force is mediated by force-carrying bosons called gluons. This inflationary epoch universe has two different kinds of bosons, along with the possible graviton. A possible but undifferentiated grand-unification force has just broken into two forces: the strong force, carried out by a gluon and an electroweak force, carried out by some kind of electroweak boson. So far, the universe contains only forces and the bosonic particles that carry them out.

If you are feeling confused about these strangely named particles, you may be somewhat relieved to know that they all tied together in a single model called the Standard Model. This CERN website provides a good introduction to it and then nicely puts all the elementary particles in their place: 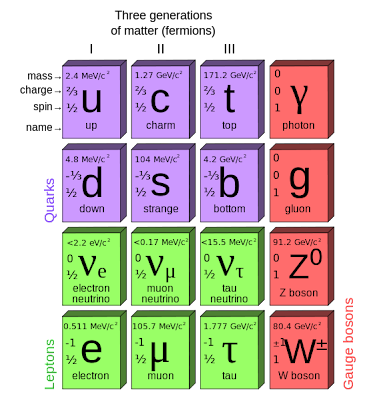 The inflationary epoch universe contains only the gluon (a red square), the graviton if it exists (not shown because it is not fit into quantum field theory), and an electroweak boson that will later break into the photon, W and Z bosons of the electromagnetic and weak forces. Quarks and leptons (purple and green squares) make up atomic matter. They don't yet exist.

During this period the universe exponentially expands from quark size to about the size of a grapefruit (this may not seem like much but it's an enormous factor of about 1026), all within a very tiny fraction of a second. Dark energy may be responsible for the accelerating expansion of the universe we observe today but it does not explain the very early universe's exponentially rapid inflation. This inflation is much faster than the speed of light, which would seem to contradict Einstein's theory of relativity. And yet physicists now have direct evidence for this being so. Matter and energy cannot travel faster than the speed of light. Faster-than-light-speed expansion, or distortion, of spacetime, however, is allowed, carrying whatever energy and matter there is along for the ride.

NASA's Wilkinson Microwave Anisotropy Probe has mapped the microwave cosmic background radiation of the universe. The inflationary universe has not yet begun to emit any radiation energy but this map gives scientists an idea of what drove the inflationary epoch universe. Current cosmic inflation theory can explain the small perturbations detectable in the cosmic background radiation, as hugely magnified quantum fluctuations that once existed in the microscopic-size universe. This theory solved several problems with the Big Bang theory but it came with a few puzzling problems as well, some of which have since been worked out.

One puzzle is what is called the horizon problem. The temperature and polarization of radiation is essentially the same in any part of the universe today. This means that very distant points in the universe have the same temperature. This might not seem weird at first. These distant points were once side-by-side neighbours before inflation began so they should be the same temperature, right? The fly in the ointment is this: the inflation happened too fast (faster than the speed of light) for any information (heat energy, for example) to be communicated between points in space. Running the inflation backward might help explain this. Imagine watching an inflation film of two adjacent points in the universe as they fly away from each other to a distance of 300,000 km. If you run this film backwards at the same speed it will take less than a second for them to come back together. They seem to have surpassed the speed of light. The solution to this problem lies in the "exponential" part. Expansion got faster as it proceeded, meaning that when you run the inflation film backward the expansion rate slows down. This gives all the adjacent particles more than enough time to share heat energy. This inflation modification of the standard cosmological model solves the horizon problem and is now widely accepted.

All the above explains, in a mechanical sense, how cosmic inflation occurs but it does not explain why it occurs. The very fabric of space-time itself at this particular point in time begins to exponentially expand - what is the trigger? No one is sure, but between 10-36 seconds and 10-32 seconds a phase transition resulting in the separation of the strong fundamental force from the other two forces (together called the electroweak force) occurs, resulting in a very rapid influx of energy and leaving the universe in a very unstable state. To give you some idea of why this symmetry breaking might be so energetic, think of how strong the strong force is - it is 100 times stronger than electromagnetism, which is several orders stronger than the weak force and very many orders of magnitude stronger than gravity.

Some physicists have suggested that the instability of the strong force symmetry breaking may have resoled in a temporary field mediated by a particle (or more precisely a string) called an inflaton. Physicists wonder how, and if, the hypothetical inflaton fits into current inflationary theory, and how recent observations of cosmic background radiation support this theory. According to cosmic inflation theory, the inflaton field settles into its lowest energy state and, as it does so, it generates a massive repulsive force that leads to a short-lived exponential expansion of the space-time matrix from quark size to grapefruit size.

The universe is still unbelievably hot and energetic. Force-mediating bosons are breaking from an unstable pre-force "goo," making the foundation for the strong, weak and electromagnetic forces we observe today.

Next: The Electroweak Epoch.
Posted by Gale Martha at 12:32 PM