WMAP (Wilkinson Microwave Anisotropy Probe) data of the cosmic microwave background (CMB) also lends convincing evidence for dark energy. Anisotropies in the CMB tell us that the universe is flat, like the bottom image in the diagram below. An anisotropy is any directionally dependent property. Two simple examples of this are sunlight going through polarized sunglasses and wood - it's easiest to split along its grain). There are three possible shapes of the universe depending on the ratio between the universe's actual mass/energy density and its critical density. This ratio is called relative density, Ω0. Critical density is the tipping-point density where the universe neither expands nor contracts. 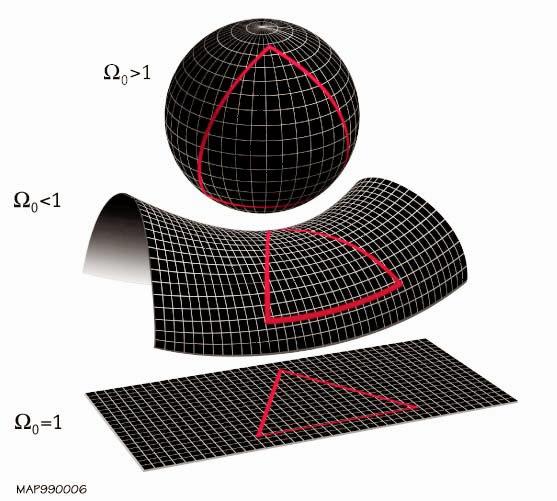 How can the universe be flat when we are taught that it is an expanding (three-dimensional) volume of space? And besides that, Einstein's theory of general relativity says that energy/mass curves spacetime. Spacetime does indeed curve, but that doesn't disprove that the large-scale space of the universe is flat.

To understand the curvature of spacetime, imagine that you fly three ships equipped with lasers into outer space and have them arrange themselves an equal distance (ignore the trickiness of distance in an expanding universe) from each other, forming an equilateral triangle by lining up their lasers on each other. An equilateral triangle should always consist of three 60-degree angles adding up to 180 degrees, but in spacetime they might not add up to 180 degrees. Why? Because spacetime can be curved. You can visualize this by imagining an equilateral triangle drawn on a globe. Those angles won't add up to 180 degrees either (the number will be larger), because the triangle you form is curved just like the one in spacetime might be, especially near any significant mass. This curviness is the nature of non-Euclidean (curved) spacetime. Physicists refer to this as the local geometry of the universe. Another term, global geometry, covers the geometry of the entire universe including what extends beyond what we can observe, and in particular, it describes the topology of the universe as a whole. Topology, a purely mathematical description of a shape or space, should not be confused with topography. Topology as a field of study first struck me as something that would be really fun. You get to play around with things like Mobius strips, shown below.


This was until I tried to figure out topological space, which is what you need to describe the flatness of the universe. Perhaps you can make head or tails of it. I could not and, as a result, I found the video below called "Hitler Learns Topology" hilarious. Warning: there is a lot of swearing in it.

Here is my effort to describe the universe as flat: the topology of the universe is Euclidean, which means that two parallel lines will never meet up. The universe is flat, but not in the sense that a piece of paper is flat. It means instead only that the global geometry of the universe is such that the angles in a triangle will always add up to 180 degrees, and the corners of cubes will always make right angles. You can think of this flatness in the same way that you could curve a flat sheet of paper around a ball. On the paper, you can draw an equilateral triangle with angles that add up to 180 degrees. The universe is four-dimensional so instead of curving a 2-D sheet of paper around a 3-D ball, 3-D space is curved around a 4-D surface of spacetime.

This flatness (the actual shape of the universe) should not be confused with the observable universe, which is a spherical volume of space centered on the observer (Earth) where electromagnetic radiation dating back to photon decoupling (the CMB) can be detected.

The proper distance from the origin of the CMB to Earth is almost 46 billion light years, making the diameter of the observable universe about 93 billion light years across. As mentioned before, it is easy to assume that the CMB should be just 13.8 billion light years away, since that's how long light has been traveling (at light speed). The much greater distance takes into account the metric expansion of space that occurred while the photons traveled through it to get here. Yes, it might seem that light traveled faster than light speed but it did not because space itself expanded - because space itself expanded, Einstein's special relativity remains intact. An "Aside" follows this series of articles in which I tackle how difficult it is for me (and I suspect a lot of us) to visualize the universe and our place in it.

If the universe is flat, then it's total mass/energy density must equal its critical density. The densities of atomic matter and dark matter account for only a third of the critical density. The rest must be made up of another form of energy (dark energy) in order to maintain a flat universe that is in keeping with the WMAP observations. Sure, this stuff is tough slogging at times, but the experience of pure amazement makes it worth the effort. I find it absolutely amazing that the CMB reveals so much information about the evolution and nature of the universe! Next, I will describe two more lines of evidence for dark energy. Altogether, these provide almost rock-solid proof that it exists, in Dark Energy Part 10.
Posted by Gale Martha at 4:02 PM