The Evolution of Photons, Atoms and Neutrinos in the Universe

Where do photons, atoms and neutrinos come from? Consider the early universe again for a moment. Particles of matter such as electrons and quarks actually came from photons. For example, electrons form as part of a reversible reaction between two gamma photons (γ), as shown by the reaction below. As long as the gamma photons have enough energy to convert into the rest masses of the electron and positron, the reaction will proceed to the left as well as to the right. If there is even more energy in the system, the reaction will favour the left and you will not have any electrons or positrons, just photons. This was the state of the universe before it contained any matter. It was filled with very hot very dense photon gas.

This reaction is called electron-positron annihilation. In most (lower energy) locations in the current universe, an electron approaching a positron (the antimatter twin of the electron) will immediately annihilate into two gamma photons. The rest masses of the two particles are converted into (gamma photon) energy. At everyday energy, the reaction arrow points to the gamma photon products. This fundamental reaction is famously represented as a Feynman diagram, shown below left. 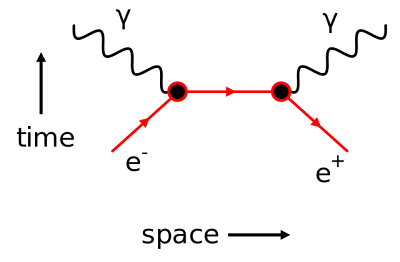 If you want to know more about antimatter, try my article Antimatter.  Did you notice that the positron (e+) moves backward in time (downward)? To explore this unsettling notion try my article, Time. 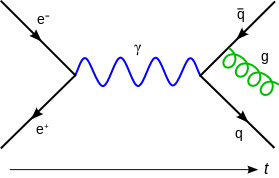 From a beginning of pure energy, the very early universe cooled just enough that it was soon buzzing with fast (very energetic) electrons and quarks making up what is called quark-gluon plasma. At first, they were far too energetic to form even the simplest atoms. But when simple atoms did form, they had tremendous energy. By about 380,000 years old, the universe was filled with a slew of energetic hydrogen atoms and helium nuclei. This period of time is called the recombination epoch. Free electrons were captured by free protons to form hydrogen atoms, and these atoms were moving fast everywhere. All other atoms were later built from this initial collection of starter hydrogen and helium. The energy of atoms today, on average, is far less than those starter atoms (most aren't travelling at almost light speed, and they are not in a highly excited state) and that is why the atomic contribution to mass-energy has decreased.

Photons decoupled from matter when the universe was about 380,000 years old. Well before this, the universe was a hot buzzing photon gas that was also dense with neutrinos. In fact, neutrinos, electrons and quarks existed in equilibrium with each other, interacting through the weak force. Neutrinos decoupled from matter and became free to stream in all directions when the universe was just a few seconds old. They make up the cosmic neutrino background (CNB). Unlike the CMB, which can be even be picked up as snow on an old-fashioned rabbit-ear TV set, the CNB is almost impossible to detect because the neutrinos now have very low energy and they are notoriously hard to detect.

Where did neutrinos and photons come from? The answer to this question is why we worked so hard understand gauge theory (and the process of symmetry-breaking), a few articles back. This Hyperphysics link offers a short-version answer to where photons, for example, came from.

This doesn't mean that the atomic picture of the current universe is a static one. Individual atoms are torn apart (fission) and put together (fusion) all the time, as mentioned in the previous article. Stars contain trapped photons with enough energy to create electrons and positrons as well as many neutrinos. Stars are converting atomic mass into energy through atomic fusion. Importantly, the overall atomic mass of the universe has remained very constant over billions of years. Even all the star-burning has not reduced the total mass significantly, as mentioned in the previous article.  And black holes, which consume matter and light, may be thermodynamically neutral by virtue of their release of Hawking radiation back into the universe.

We now have an idea where atoms, photons and neutrinos came from, and that their atomic mass/energy has changed over time. Remember that their mass/energy declines and, in the later two cases, all but disappears from the NASA pie charts. Atoms did not decline but their average energy did. Where did the photons and neutrinos go? I'll leave this tantalizing question open for just a bit longer.

Imagine a pie chart of the universe's mass/energy composition many billions of years in the future. If the universe continues to expand, it may end in some kind of big freeze. Eventually, stars will exhaust their fuel and burn out. Gas clouds will be too diffuse to create new stars. Black holes may grow as they consume the left over dust but they too will eventually evaporate through Hawking radiation mentioned earlier. It is even possible that protons themselves may eventually decay, doing away with atoms altogether. This would leave behind a very empty universe populated only very sparsely by low energy photons, electrons and neutrinos (all stable) and dominated by dark matter and dark energy.

The pie charts tell us that the average mass/energy of the atomic, photon and neutrino contents of the universe have declined, based on analysis of the  WMAP (Wilkinson Microwave Anisotropy Probe) data. WMAP's data maps minute differences in the temperature of the cosmic microwave background (CMB), shown below. 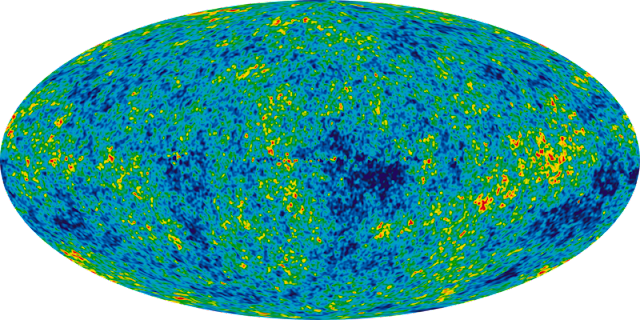 So far, we have traced the decline of atomic mass/energy to an overall decrease in the energy of atomic matter. Is this what happened to photons and neutrinos too? Find out in Dark Energy Part 6.
Posted by Gale Martha at 2:13 PM