A third line of evidence comes from the 2011 WiggleZ galaxy survey. The redshifts of over 200,000 galaxies were measured at distances up to 8 billion light years away, going more than halfway back to the Big Bang. This method introduces a new method to measure large distances in space. We already explored the use of Type 1a supernovae as standard candles. You can't use galaxies as standard candles because galaxies evolve. Even spiral galaxies, which might seem similar to one another, vary widely in mass, brightness and overall size, as well as in the size of their halos and central bulges. The light they emit is not consistent. Researchers instead capitalized on the fact that galaxies have a tendency to be spaced about the same distance apart from each other (a little known fact that hints once again at the cosmic microwave background (CMB)). They used regular voids (large areas containing no stars) that are approximately 500 million light years across. The NASA image below compares the use of Type 1a supernovae as standard candles (left) with the use of intergalactic voids as standard rulers (right). Both achieve the same goal - measuring distances in expanding space. 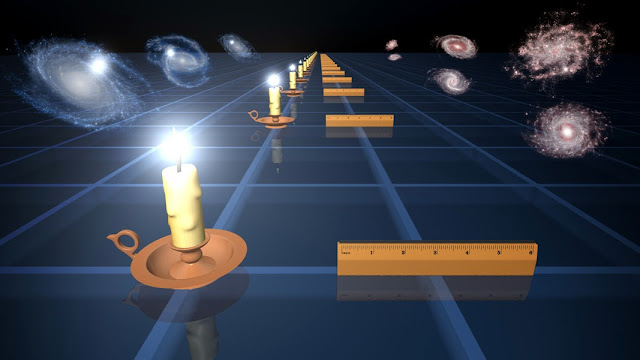 These voids were left behind from baryon acoustic oscillations in the CMB and they can be used as standard rulers to measure distances between the galaxies. These oscillations are described in detail in the Dark Matter article, but let's review them here.

Galaxies tend to form in pairs or clusters separated from each other by approximately 500 million light years (150 megaparsecs). They formed within regularly spaced slightly denser pockets of space left behind by microscopic (quantum-sized) oscillations that occurred when the universe was a mere 380,000 years old. The universe at that time was an extremely dense hot plasma that acted like a fluid. Acoustic oscillations arose from the competition between particles of matter and photons within the fluid plasma. Photons exerted an outward pressure that tended to erase denser pockets, while matter particles are gravitationally attracted to each other so they tended to collapse into denser patches, increasing their density. These two counteracting forces created a spherical oscillation in the plasma, working exactly the same way as sound waves moving through air do, except that this "sound" wave was made of photons and matter particles, whereas a sound wave in air is made of air molecules.

Gravity pulled matter into the denser center of each oscillation. This oscillation is quantum-originated, so it was once quantum-sized, but it grew thanks to the rapid expansion of the universe. As it expanded, matter increasingly collapsed into it. The current pattern of galaxy clusters in the universe is thought to be the leftover frozen signature of not just one oscillation or ripple, but many overlapping ripples, like waves emanating from an object dropped in a pond, except in three dimensions rather than two.

The regular intergalactic distance gives researchers a standard ruler. In the night sky it is measured by something called a preferred angular separation. Taking these angular measurements along with different redshifts of galaxy pairs allows physicists to figure out redshift as a function of cosmic distance.

They were able to show, using a method independent of the Type 1a supernova data, not only that the universe's expansion is accelerating but also when that acceleration began.

There is also direct evidence for dark energy in the flattening of gravitational wells and hills observed in the CMB. These are the pockets of greater and lesser density I mentioned earlier - the ones formed by the competition between photons and matter particles when the universe was very young. These density wells and hills produced lightly warmer and cooler spots in the CMB (these temperatures are what the WMAP mapped). The reason for these tiny temperature variations is that each photon gains a little energy going into a well (a sort of a gravity assist except that for complex reasons it keeps some of its extra energy) and it loses a little energy passing through a hill. Flattening is caused by the accelerating expansion of space. The wells and hills flattened in the time it took photons to pass through them. Those once-tiny gravitational wells tend to correspond to the large structures we see today, such as galaxies and superclusters. This flattening phenomenon is called the late-time integrated Sachs-Wolfe effect. These kinds of measurements offer a picture of what kind of gravitational environments the photons experienced on their long journey from the point of last scattering to Earth, but they focus especially on the end of the matter-dominated era (when the effect of dark energy begins to take over), hence the use of "late-time" in the name. This effect offers proof for dark energy because accelerating expansion is required to explain the extent of the flattening that occurred. If the universe wasn't expanding at an accelerating rate, the temperature variations in the CMB would be far greater than those observed.

The evidence for dark energy is very good. But none of these observations tell us what dark energy is. We'll explore that next in Dark Energy Part 11.
Posted by Gale Martha at 11:13 AM