This name, deriving from ancient Greek, meaning "fifth element" after the four medieval elements of air, water, earth, and fire, is a theory for a new kind of energy field that creates negative pressure. This theory was first proposed in 1998 by R.R. Caldwell, R. Dave and P.J. Steinhardt. Here, quintessence is treated as the fifth factor influencing the universe's evolution, along with baryons, leptons, photons and dark matter.

In most mathematical models, quintessence is the energy density of a scalar field (points in scalar fields have magnitude but no direction) that is slowly rolling downward toward a specific potential energy. Rolling scalar fields, as the CERN (European Organization for Nuclear Research) paper's link tells us, are a central concept in cosmology. "Their dynamics are governed by two main ingredients: the steepness of the potential [] and the equation of state of the background fluid []." Equation of state is a set of values for all the variables of a system, and they all relate to one another. Here, physicists treat space as a perfect fluid. Measurements such as the ratio of pressure to density are often used. In this case, radiation energy density and matter energy density are incorporated into the formulas. In this model, both total energy density and equation of state evolve over time. There are currently several categories of quintessence models in which the dynamics of the scalar field differ. The following description is a general one.

The energy is negative as long as the change is slow enough that the kinetic energy remains less than the potential energy. As the universe evolves, the energy density of radiation (photons) decreases more quickly than matter energy density does, as mentioned in previous articles in this series. The quintessence field has a density that closely tracks, but is less than, the radiation density of the universe until the energy densities of radiation and matter meet up and become temporarily equal to each other. The mathematical expression of this theory has something called an attractor solution built into it and this is key to how its behaviour changes once matter begins to dominate in the universe. An attractor is any set of points toward which a variable (moving according to the rules of the dynamical system it is in) evolves over time. The scalar field slowly rolls downward until an attractor solution is reached. At this point, the field becomes frozen in a sense.

The graph below adapted from a paper called A Quintessential Introduction to Dark Energy from Princeton University helps us to visualize what this means. (this paper is a great introduction to the mathematics behind this theory, and, also, I like the pun in the title). This graph compares the energy densities of matter, radiation and quintessence from the very young universe to almost present time. Notice that the universe starts with a greater radiation energy density than matter energy density, but that picture changes as the universe evolves. This means that both the kinetic energy and potential energy evolve too, and that, in turn,  changes the overall dynamics of the universe. The rolling scalar field describes this dynamical change over time and it has a unique feature in that it becomes frozen at a certain point and from then on begins to have a growing effect on how the universe behaves - it leads to runaway expansion. The mathematics of this theory provides a mechanism in which the dynamics of quintessence can change, becoming a force that dominates and drives the accelerated expansion of the universe. 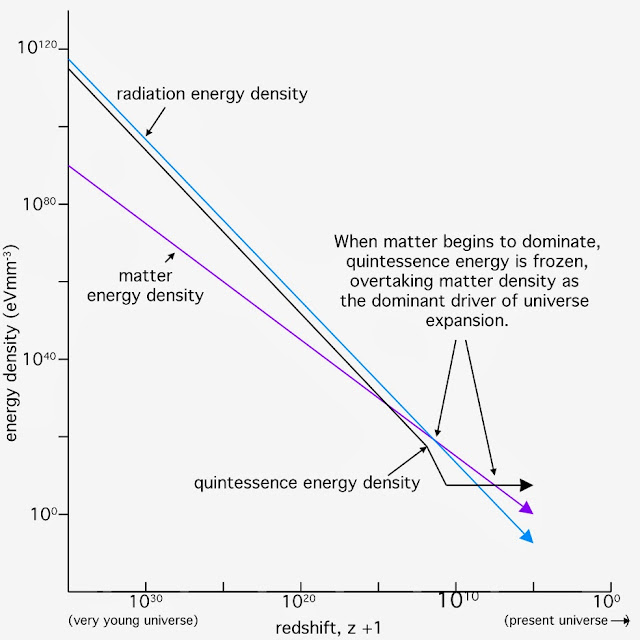 (Redshift is defined as z + 1 = wavelength observed/wavelength at rest, where redshift is always a positive value and blueshift is a negative value. Stars very close to us, such as the Sun have no redshift so z +1 = 1 (here t = 0 and z = 0) just right of the graph above).

The graph below, redrawn from a CERN paper called Scalar Fields and Cosmological Attractor Solutions offers an explanation for how the dynamics of quintessence changes through the utilization of attractor solutions. For a rolling scalar potential you can pick out up to 5 attractor solutions when you build a mathematical framework of it. This graph is a generic set of solutions. The red line represents a unit circle, x2 + y2 = 1. 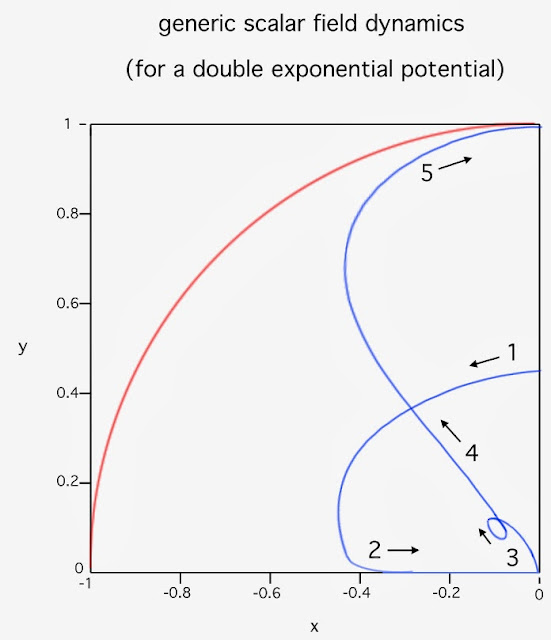 You can think of the five regions above as something like physical phase transitions of space. All regions describe what kind of energy state the scalar field is in as it evolves over time. Region 1 represents the very early universe - a situation in which the potential energy is quickly changing into kinetic energy. In region 2, kinetic energy dominates the energy density of the scalar field. In region 3, the field stays fairly constant until the attractor solution is reached. In region 4, the field evolves along the attractor solution (showing the "attraction" aspect of an attractor solution). Here the ratio of kinetic to potential energy remains fairly stable. In region 5, potential energy in the scalar field becomes important to the dynamics of the universe. The field approaches the unit circle (red line above). As the field evolves toward the end, y approaches 1 and x approaches zero. This is where the scalar potential is overtaking the energy density of matter in the universe and the potential evolves into a basically flat, or frozen field. At this point, the scalar field of quintessence is driving the dynamics of the universe. It is expanding at an ever-increasing rate.

Quintessence is like the cosmological constant in that both theories evoke a kind of energy interwoven into space itself. Quintessence differs in that its energy is an evolving energy that is tied very closely to the universe's changing potential and kinetic energy states, whereas the cosmological constant vacuum energy is a constant amount of energy per unit space. As space increases, its energy increases. The following brief 3-minute video by the Science Channel describes where physicists are at in terms of understanding this mysterious phenomenon.

Quintessence theory is a very new one. No one knows if there really is a scalar field driving the runaway expansion of the universe, or whether there is some kind of scalar boson perhaps that mediates it. The idea is mathematically quite elegant at least to me but then again the mathematics behind string theory are wonderfully sewn together too. Neither have observational evidence to back them up. There is going to have to be much more work done (and more precise observation of how objects behave in our universe) before anyone can say with confidence quintessence is real. And if it is, how does it interact with the cosmological constant. Physicists are very confident that there is indeed a non-zero vacuum energy in the universe, but how that energy might play with this kind of scalar field is another question to ponder.

It's possible that dark energy isn't dark energy at all. It might not be about mysterious energy fields in space. The accelerating universe could instead signal something about gravity that general relativity has overlooked. In this case, both dark matter and dark energy could be sign posts to a new frontier in gravity theory. The way to figure out what dark energy really is is to look more closely at how dark energy is affecting the expansion of the universe over time. More precise data about how stars are moving in expanding space is exactly what researchers need to help solve the puzzle of what dark energy is, next in Dark Energy Part 13.
Posted by Gale Martha at 10:09 AM