Every material is diamagnetic. This process creates a magnetic field within a material that is opposite to an externally applied one, causing a repulsive effect. This happens even in ferromagnetic materials, which are, overall, attracted to each other. Here, an external magnetic field alters the orbital velocity of electrons in atoms, altering their intrinsic magnetic dipole moment. This effect is usually very weak and sensitive instruments are required to measure lines of magnetic flux curving away from the material. It is easily overcome by the attractive magnetic force acting between ferromagnetic materials.

Magnetic flux, once again, is simply a measurement of the quantity of magnetism. These are the lines you see when you hold a magnet near iron filings. In superconductors, a powerful quantum effect, called the Meissner effect, can emerge where these lines of flux are completely blocked, except for a very thin surface layer. This powerful diamagnetism is the result of a completely different mechanism than the one described above. An external magnetic field sets up electric currents near the superconductor's surface that cancel out the applied magnetic field. This powerful repulsive effect can overcome gravity, resulting in magnetic levitation. Below, strongly diamagnetic pyrolytic carbon (the grey square with a hole in it) levitates above four permanent magnets. 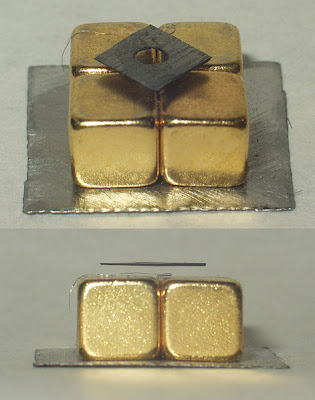 This kind of diamagnetism is used to support maglev trains, with the great advantage of frictionless transport, shown here. 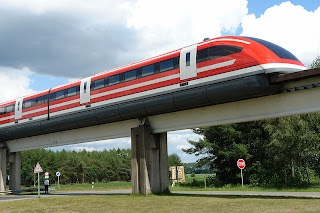 In contrast to diamagnetism's repulsive response to magnetism, paramagnetic materials are attracted. It is a weak phenomenon, again requiring sensitive measuring instruments, and, like diamagnetism, the response is transient. It dissipates once the external magnetic field is removed. When it is removed, the kinetic motion of atoms randomizes the spin orientations, much the same as it does with non-permanent ferromagnetic materials. Whereas ferromagnetism relies on the spin alignment of two or more unpaired electrons, which then act as a single quantum unit, paramagnetism relies on the parallel alignment of lone electrons that do not pair up. These lone valence electrons are what make metals such as magnesium and lithium paramagnetic, for example. These atoms have intrinsic magnetic dipoles thanks to the spin of their unpaired electrons but only when a magnetic field is applied do the dipoles line up in one direction and the material displays magnetic attraction. The process of lining up in this case, creates torque on the magnetic dipoles, and they are actually in a higher potential energy state than when they are not in a magnetic field. In nonpermanent ferromagnetic materials, on the other hand, spin alignment reduces overall potential energy. It is a preferred state that is overcome by the kinetic energy of the atoms.

A paramagnetic sample placed within a magnetic field:

The same sample right after the magnetic field is removed:

Once the magnetic field is removed, the atoms quickly lose their alignment, a bit like a spring bouncing back once it is no longer compressed.

These materials are unique in that they have more than one optimal ground state, which represents a minimum potential energy. In one dimension (a single line of atoms), you get only one choice of spin ground state - up/down/up/down, but in two dimensions, like this diagram, you have several possible ground states.

Hematite is an Interesting Magnetic Specimen

Remember the example of hematite as a ferromagnetic material, in the previous article on ferromagnetism? Hematite is a mineral ranging in colour from black to steel to brown to red. This is an example from Michigan. The hematite is the very shiny black deposits in this reddish ore. The yellow dots are simply reflections from the light source that was used: 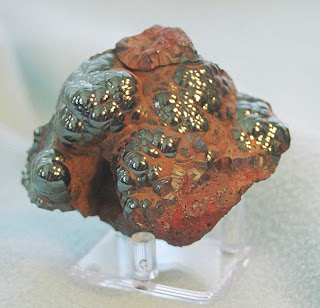 Hematite is very strong but brittle. It can be made into jewelry or other objects such as this bear carving: 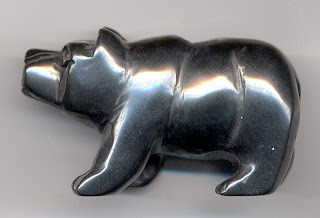 Hematite, a ferric oxide, with the formula Fe2O3, can also display antiferromagnetism. This is how it works:

Iron and oxygen ions crystalize into a fairly closely packed hexagonal structure where the magnetic moments of the Fe3+ ions are ferromagnetically coupled within what are called the c-planes of the framework. These same ions are also antiferromagnetically coupled between the c-planes. All 3-dimensional crystals have three lattice planes, a, b and c. The c-plane is one of three 2-dimensional planes within a crystal. Above 10°C, the spin moments in the c-plane are slightly canted or tilted. As a vector result of these two kinds of contributing magnetism, hematite is weakly magnetized in the c-plane. It is a weak permanent magnet at room temperature, which you can attest to if you happen to own a hematite bracelet. Some people believe this material has curative properties. However, below 10°C, the direction of the antiferromagnetism changes and becomes exactly parallel to the c-plane axis. Now, hematite shows no spin canting and becomes a perfect antiferromagnet. It now has zero net magnetic moment and it displays no magnetism. This temperature-dependent transition in spin is called the Morin transition. If you heat the hematite once again, this time above its Néel temperature (675°C), like other antiferromagnetic materials, it becomes paramagnetic. It shows a very weak and transient attraction to a magnetic field.

For ferrimagnetism to happen, the sublattices must consist of two different materials or two different oxidation states of one element, such as Fe2+ and Fe3+ ions, which differ in the strength of their magnetic moments. Ferrites and magnetic garnets exhibit this kind of magnetism. Magnetite, which consists of both Fe2+ and Fe3+ ions, was classified as a ferromagnet before Néel's discovery of ferrimagnetism and antiferromagnetism in 1948. Now, it is more correctly classified as a ferrimagnet. Like ferromagnets, ferrimagnets retain their magnetism in the absence of a magnetic field, at least for a while, depending on the magnet's hardness.

These magnets display ferromagnetism much like typical metal and metallic oxide magnets do and they can be hard or soft, depending on the strength of their coercive field, just like metal-based magnets. However, in metal magnets, magnetism arises from the alignment of the spins of unpaired electrons that are lined up in a crystalline structure to create domains. Molecular magnets instead rely on their molecular structure to align electrons. Most are purely organic molecules, which tend to come with horribly long names, such as p-nitrophenyl nitronyl nitroxide. Instead of being made at high temperatures within a strong magnetic field, molecular magnets are made in low-temperature liquid solutions. Here they can be chemically tailored to fine-tune their magnetic properties. These magnets need to be very cold (usually around -200°C) in order to display magnetism. At room temperature, the kinetic energy of the molecules tends to destroy their molecular alignment. This is a problem similar to that with superconductors. So far, most are simply laboratory curiosities with no practical applications. However, a group of Canadian researchers recently discovered a new molecular magnet, which is an organic metal hybrid made up of two parts nickel ions to one part organic ligand. This new class of molecular magnets can work at room temperature. No one is sure yet why they work but this discovery is likely creating a buzz in labs around the world. Molecular magnets might be easier to make than traditional ones and easier to mold into shapes, which is difficult with metallic magnets because they lose their magnetism when heated. These magnets might be useful some day to make thin magnetic films or in new kinds of computer memory storage, for example.

In the 1800's, Andre-Marie Ampere discovered that two wires carrying parallel electric currents in the same direction attract each other, and two wires containing currents running in opposite directions repel each other. This phenomenon seemed reminiscent of when you put two opposite magnetic poles close to each other and they attract each other, and vice versa. This force is called the magnetic force. Now, if you form these wires into loops and create circular currents, you can get an attractive or repulsive force between the loops, depending on whether the currents in them are in the same, or in opposite, directions. If you then create a coil of many loops, a solenoid in other words, and run current (in the same direction) through it, you create an electromagnet. The more loops you add, the stronger your electromagnet becomes. The resulting magnetic field creates a magnetic force that stops as soon as the applied current is shut off.

Using just a few inexpensive and readily available items you can make your own electromagnet and use it to explore how magnetism and electricity work together. This excellent and easy to follow 10-minute video shows you how, and it is appropriate for anyone around age 10 to 110:

Electromagnets are very useful and widely used. They are essential components in the electric motors inside your household appliances, and in generators, loudspeakers, hard disk drives, MRI machines and the list goes on.

In electric motors, a current-carrying wire is bent into a loop. When the two sides of that loop are placed perpendicular to a magnetic field (the loop is placed between the north and south poles of two magnets), the loop will experience a torque and start to rotate. This relationship is described by the motor principle. This 9-minute video (its animation is a bit dated but it's good) explains the motor principle very well and how electric motors work:

The rotation of the loop is used to do work, such as driving a turbine or a rotor in a washing machine, for example. This 8-minute video (with great graphics and animation) explains in greater detail how a typical electric motor is set up, because the host builds one for you in cyberspace:

You can also use mechanical energy to make electricity. Generators work on the same principle as electric motors, but backward, as illustrated in this excellent Scienceman digital lesson, which shows you how a generator creates AC current:

In the next and final article, we will explore how magnetism and electricity are unified as one fundamental force, electromagnetism.
Posted by Gale Martha at 2:06 PM