Ferromagnetism is the basic mechanism by which certain materials form permanent magnets or are attracted to magnets. This is the strongest type of magnetism and it's the only kind that can be felt, such as the pull of a fridge magnet toward your fridge. Ferromagnetism is the everyday magnetism we are all familiar with.

Ferromagnetic materials can be divided into "soft" materials like iron, which can be magnetized but do not tend to stay magnetized, and "hard" materials like lodestone, which are permanent magnets; they tend to stay magnetized. We make a permanent magnet from a ferromagnetic material such as ferric oxide by melting it and subjecting it to a very powerful magnetic field while it cools. This process aligns its atoms into a precise microcrystalline structure. In the case of lodestone, most physicists think that lightning does this job. Permanent magnets have a quality called high coercivity. This means that they have a high threshold against demagnetization. However, even permanent magnets can be demagnetized and I will explain how in a bit.

As explained in the previous article, ferromagnetism is a property of not just of which kinds of atoms (iron, iron oxide or another metal, for example) are in a material, but of its crystalline structure and atomic organization as well. This means that one ferric oxide (Fe2O3 for example) might be less magnetic than another one (FeOFe2O3 for example), depending on how the atoms are arranged with one another.

This is the crystalline structure of hematite (Fe2O3), which is weakly ferromagnetic: 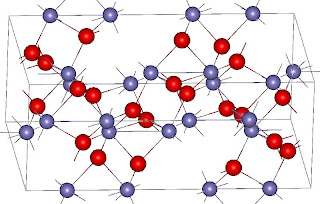 In contrast, this is the crystalline structure of magnetite (FeOFe2O3), which is strongly ferromagnetic (it includes lodestone): 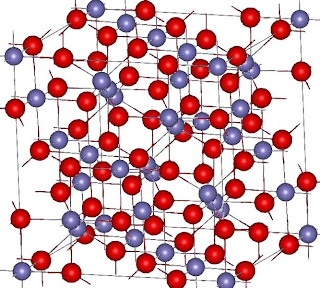 There are also ferromagnetic metal alloys whose constituents themselves are not ferromagnetic. These are called Heusler alloys. An example is an alloy of copper, magnesium and tin. None of these metals in pure form display measurable magnetism but together they do. In an alloy, these metals exist as ions in different oxidation states. This allows them to form into a crystalline structure that provides an easy way for electrons to be exchanged between different metal ions. In other words, this makes it easier for the electrons to line up their spins. Below is a diagram of the general lattice structure of Heusler alloys, where X, Y and Z represent the three constituent metals. 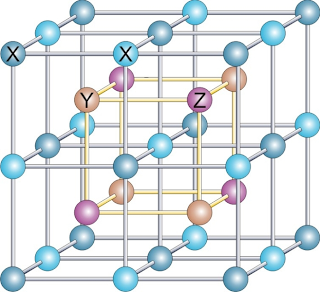 Notice how orderly the lattice is arranged. Metallic lattices like this one create environments in which the electron spins can easily line up. That is why the atoms in most magnets happen to be arranged in these metallic lattices.

The mechanism responsible for making this metallic lattice magnetic is a quantum mechanical effect. Electrons are fermions and that means that they have a 1/2 spin. Because of this spin, no two electrons can occupy the same space (bosons with whole integer spins can). However, they can come close and reduce their overall potential energy in the process. In these alloys, and in fact in all ferromagnetic materials, a mechanism called the exchange interaction allows the wave functions of neighbouring electrons from two atoms to line up and create an overall wave function of lower potential energy. As a result, the spins of electrons in ferromagnetic materials tend to want to be lined up parallel to each other. Electrons also have intrinsic magnetic moments but this contribution to overall magnetism is negligible, as I mentioned earlier, in comparison to this essentially electric interaction.

Most ferromagnetic materials are crystalline, allowing them to achieve the structure and exchange interaction I have outlined, but some are not. These metal alloys are made ferromagnetic when they are very rapidly cooled, so no crystals can form. However, the same exchange interaction does occur between their electrons. Some of these amorphous alloys have advantages over crystalline structures, such as resistance to changes in temperature and to changing electric fields. A lot of research is going on right now to find out how magnetism arises in these materials and how they can be used.

A relatively new kind of very strong magnet can be made from rare earths rather than metals, and here, the exchange mechanism is similar but it can occur across as many as 7 unpaired electrons with aligned spins. The electrons are strongly localized so they retain their magnetic moments very well. The crystalline structures of rare earth magnets also have very high magnetic anisotropy. That means that they have a very stable atomic alignment making them exceptionally easy to magnetize in one direction but they resist magnetization in other directions. The most common rare earth magnet is made of an alloy of neodymium, iron and boron. These magnets can be twice as powerful as ordinary ferrite (iron) magnets but they are very brittle and vulnerable to corrosion, so they are usually plated with nickel. Here is one such nickel-plated magnet from the bracket of a computer's hard drive:

These hard drive magnets are powerful, making them excellent for magnetic data storage. The magnetic flux patterns on them can last many years and they can be easily erased and rewritten. As I write this article on my computer, data is "written" on my hard drive disk. A pattern of tiny electrical impulses representing these words passes through a coil in the recording head. This produces a related pattern of magnetic fields. These fields, very close to the disk, alter the magnetic orientations of bit regions on the disk itself. The magnetized bits on my hard drive disk now represent my data.

In the previous article I said that when a number of spins line up in a material it is considered magnetized. Regions in a ferromagnetic material in which all the spins are lined up in one direction display uniform magnetization, and are called a magnetic domains. A magnetic domain simply means that the individual magnetic moments of the electrons are aligned parallel with each other, all pointing in the same direction. It is what makes a ferromagnetic material magnetic. Differently aligned domains can exist within one sample. This means that a magnet, for example, might not be homogenously magnetic, and its net magnetic strength, as a result, will be lower. However, just as the magnetic moments of individual electrons tend to line up parallel to an external magnetic field, so do domains. Like individual electrons, domains tend to favour this arrangement in order to maintain a slightly lower potential energy state. So, even when a magnetic field is removed, the electrons in a ferromagnetic material tend to maintain their orientation, even when the material is not a permanent magnet. The natural kinetic or vibratory movement of atoms, however, tends to destroy this alignment over time. How long electrons manage to maintain their orientation determines how permanent, or hard, a magnet is. Now, can you guess how heat might affect the arrangement of magnetic domains within a material? You can check your answer in a moment.

This is how the domains look inside a saturated magnet displaying strong ferromagnetism:

This is a ferromagnetic sample containing various aligned and unaligned domains:

This sample will exhibit weaker magnetism than the saturated magnet diagramed above. Remember that magnetism is a vector force, so a component of the lower right domain will contribute, along with the lower right and upper left domains, to the sample's overall magnetic strength.

Earth is One Big Ferromagnet

Iron is ferromagnetic, and when it is incorporated through natural processes into iron oxides, and other minerals, it can be used to record ancient changes in Earth's magnetic field. Scientists can take samples of these minerals and measure their residual magnetization, the magnetization left behind in ferromagnetic materials after an external magnetic field is removed. This data tells them that Earth's magnetic field not only fluctuates in intensity, it completely reverses at random intervals, averaging once every several hundred thousand years. These geomagnetic field reversals happen when the flow of molten metals within Earth's outer core is disrupted. An impact with another large body like an asteroid could cause such a disruption but some scientists think that internal triggers, such as the subduction of large plates, may be possible triggers as well. There is no universally agreed upon model for why these reversals occur. Geomagnetic field data also allows these scientists (called paleomagnetists) to calculate past motions of continents and ocean floors, providing proof to the theory of continental drift.

A magnet that has all of its domains aligned is called a saturated magnet. It displays maximum possible magnetic strength. Several processes can desaturate a magnet, causing some or all of its domains to become randomly aligned. One way is to heat it. If you heat a magnet above what is called Curie temperature, the atoms attain so much kinetic energy, they are vibrating so violently, that they can no longer maintain their special structure and the electron spin alignment gives way. The magnetic domains become disrupted and the magnet loses its magnetism. Dropping or banging a magnet against something will do the same job. Non-permanent ferromagnetic materials lose their domain alignment over time regardless of how they are treated. How fast they lose their alignment determines how soft they are. Each ferromagnetic material has its own Curie temperature, above which its magnetism is eliminated. The Curie temperature for iron, for example, is 770°C. An iron oxide magnet heated to this temperature is no longer a magnet. The Cure temperature for rare earths is well below room temperature. This means that in pure form at room temperature, rare earths like neodymium are not magnetic at all. Only when they are alloyed with other metals do they become powerful and permanent magnets, such as the hard drive magnet described above, at room temperature. The Curie temperature of neodymium alloy magnets is quite high, between 310°C and 400°C. Yet, if you put a hard drive magnet in a self-cleaning oven and turned on its cleaning cycle (it heats to 500°C), you would destroy its magnetism.

Another way to demagnetize a magnet is to subject it to a changing electric field. Here, the magnet is retracted through an electric coil with alternating (AC) current. The magnet's magnetic domains become randomized and it is demagnetized. This process is called degaussing. If you hear a brief but loud thunk when you turn on your TV, it is likely degaussing itself. Most computer monitors also degauss automatically. In this case, you might hear a "dwoing" sound when you turn it on. This process is believed to improve picture quality. Degaussing is also used to demagnetize naval submarines to make them harder to detect by other submarines and naval ships. Over time, these vessels acquire a potentially detectable magnetic signature due to interaction with Earth's magnetic field, so they are routinely demagnetized within a changing electric field. This can be done by draping heavy gauge copper cables over the vessel and pulsing very high electric current through them as shown here: 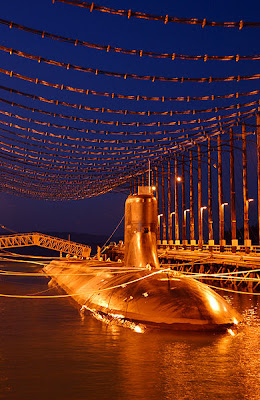 In addition to ferromagnetism, there are other kinds of magnetic order within materials. These will be explored in the next article, "Other Kinds of Magnetic Ordering."
Posted by Gale Martha at 7:01 PM