Magnetism Explained: 1 An Introduction To Magnetism

This article covers a general overview of magnetism and how our understanding of this phenomenon has grown over the millennia since it was first discovered.

We all tend to think of magnetism as a mysterious phenomenon specific to specially treated iron or steel, like these steel fridge magnets. 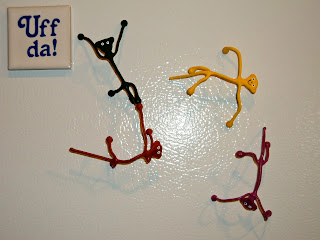 Magnetism is actually a much more widespread phenomenon than this. In this article, we will explore how magnetism arises, how it is a part of every atom, and how magnetism fits into the world of forces around us.

The Discovery of Magnetism

As far back as 600 BC, ancient Greeks wondered about the strange properties of naturally occurring stones called lodestones  (Fe3O4), such as the one shown here, courtesy of Geology.com (an excellent resource for all kinds of rocks) 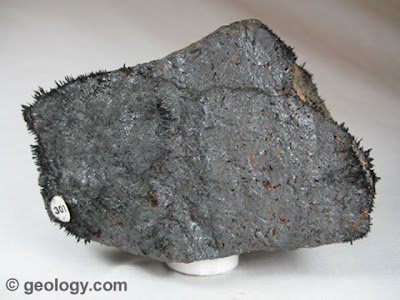 Notice all the iron filings attracted to it.

These stones were found near the ancient Greek city of Magnesia and so they were named magnets. They are attracted to each other as well as bits of iron. Not surprisingly, when the mysterious properties of lodestones were discovered, they were soon surrounded by superstition and were thought to possess magical powers. By around 1200, the Chinese realized that lodestone could be very useful - as a magnetic compass. Within about 100 years, compasses were being used around the world for navigation at sea. This discovery was a major breakthrough - it paved the way for the golden age of worldwide exploration. At the time, ship navigators believed that their compasses lined up with the North Star, Polaris, or perhaps some large magnetic island at the North Pole. What they couldn't figure out was why their compass needles shifted direction as they sailed across the globe and why the north on their compasses did not always line up exactly with Polaris. These discrepancies eventually lead Renaissance scientist William Gilbert to conclude in 1600 that Earth itself must be a giant magnet, and that this is actually what the compass needle responds to. But what mechanism made it point north remained a nagging question, and until Christian Oersted's experiments in 1819, the inner workings of magnets remained a complete mystery.

Oersted found out quite by accident one day that an electric current made a compass needle sitting nearby twitch. An electric current produced a magnetic force! This was to mark the beginning of our current understanding of magnetism.

We now know that magnetism is a widespread phenomenon evident throughout the universe. It is as much a part of subatomic particles as it is of giant stars, and magnetism is never uncoupled from electricity. In fact, magnetism is part of electromagnetism, one of the four fundamental forces in physics, which also include gravity, the strong force and the weak force. Like the other fundamental forces, magnetism arises from interactions that take place at the atomic level. We don't really know how gravity works yet, so this could possibly be an exception. That magnetism is such a basic part of the workings of the universe might seem odd to those of us who know magnetism only from playing with magnets. It doesn't feel like an all-encompassing phenomenon of nature. But, as I will show you, magnets are actually a rarity in the world of magnetism - and ferromagnetism, which magnets display, is almost an accident of nature, or at least an accident of atomic structuring, as we will see.

What is Magnetism? A First Look

Let's start with atoms. Every single atom of matter is composed of electrically charged particles. Negatively charged electrons orbit around a nucleus composed of neutrally charged neutrons and positively charged protons. In electrically neutral atoms, the number of protons equals the number of electrons. Some atoms are more electrically conductive than others. Let's take copper as an example. Copper atoms contain especially motile unpaired valence electrons. Valence electrons tend to fill the outermost orbitals in atoms. These are the electrons that participate in chemical bonds because they can be shared between atoms. In the case of copper, these electrons are more strongly bound to the special lattice arrangement that metal atoms like to form than they are to any individual atom. When no current is applied to the lattice, these electrons tend to spin in random directions, resulting in a zero net current. But when current is applied something interesting happens.

If we pull copper into a thin wire and connect its ends across the two terminals of a typical DC (direct current) battery, electric charge within the valence electrons will drift toward the positive terminal. Like charges repel each other and opposite charges attract each other, analogous the north and south magnetic poles of a magnet. The negatively charged electrons are attracted to the positively charged terminal. The motile valence electrons are charge carriers, and moving charge is exactly what an electric current is. What caught Oersted by surprise here is that just such a current created a magnetic force, as if a magnetic field suddenly appeared near the wire. In fact, it did.

Oersted's discovery produced a great deal of excitement in the scientific community, resulting in a deluge of experimentation. One of the scientists in this community, Michael Faraday, studied the magnetism around wires carrying DC current and established the concept of the magnetic field. You can visualize this field yourself simply by scattering some iron filings on a piece of paper over top of an ordinary magnet. The filings will arrange themselves along the magnetic field lines of the magnet, and you will see something like this pattern: 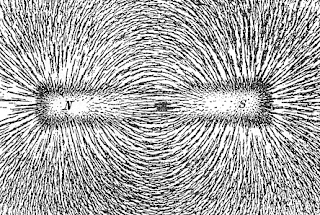 These lines are also often called magnetic flux lines. In outer space, free electrons and ions tend to attach themselves to these field lines, sometimes even becoming trapped. These lines emanate from a planet or moon that happens to have internally moving electric currents. These planets and moons are in essence giant magnets in space, and just as William Gilbert suggested, Earth is indeed a giant magnet. Powerful magnetic fields surround these planets and moons and interact with charged particles streaming from the Sun to create what we call a magnetosphere. Just as William Gilbert suggested, Earth is indeed a giant magnet. Earth's magnetosphere creates a gigantic protective bubble against a constant and deadly stream of fast moving charged particles emanating from the Sun. Without our planet's magnetic field, neither we nor any creature would be able to survive for long. This is how the magnetosphere is structured: 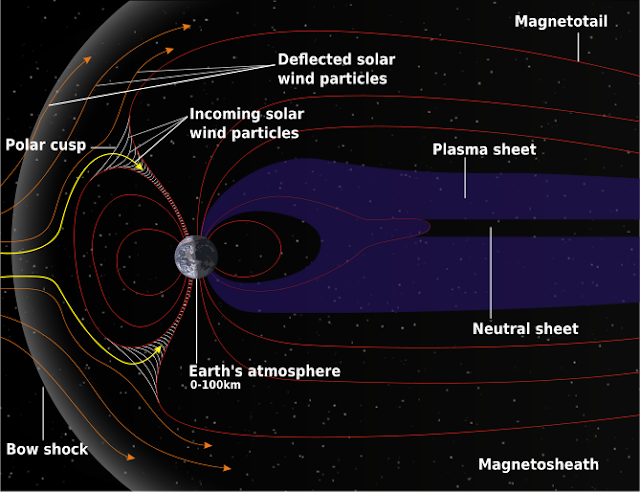 The red lines represent magnetic field lines. Charged particles are accelerated along these lines and, where they converge near the poles, they collide with with charged particles high up in the atmosphere. These collisions create the glow of the Northern and Southern Lights. If you would like to know more about how this mechanism works, please see my article called, "The Northern Lights."

James Maxwell, a contemporary of Faraday, took Faraday's concept of a magnetic field and put it on firm mathematical ground with his famous set of equations, the Maxwell equations. Knowing that electricity and magnetism are intertwined, he renamed this field the electromagnetic field. These equations describe how electric charges and currents act as sources for electric and magnetic fields. A changing electric field generates a changing magnetic field and vice versa. They represent a major breakthrough in physics, underlying many fields of study such as classical electrodynamics, optics, and electric circuits, and they are the foundation for all modern electrical and communications technologies. Maxwell's equations also provided theoretical footing for Einstein's breakthrough theory of special relativity to follow. Physicists are now developing electromagnetism even further as they incorporate it into gauge theory, quantum electrodynamics, electroweak theory and ultimately, the standard model of particle physics. We will explore the theory behind Maxwell's equations and how relativity relates to electromagnetism in later articles in the magnetism series.

For now, let's take a closer look at the mysterious magnet of the ancient Greeks, the lodestone. We now know that where there is magnetism there must be electricity, so we have to ask - how did these rocks get magnetized? There were no appreciable electric currents nearby in the city of Magnesia were there?

Lodestone is actually very unique. It is composed of a mineral called magnetite, which is relatively common in igneous, metamorphic and sedimentary rock. It is a significant component of black sands such as those around the coast of California and those off western New Zealand. There are also huge deposits of magnetite in banded iron formations around the world. This is a visually stunning example of magnetite crystals obtained from a mine in New York: 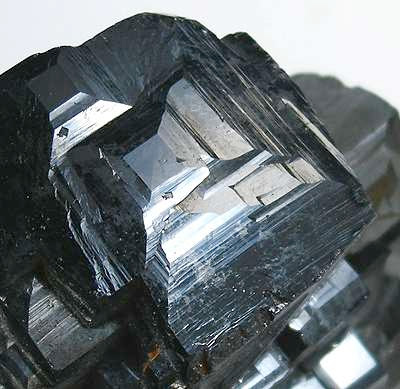 In this sample of quartz beach sand from India, magnetite, along with other heavy minerals, forms dark bands: 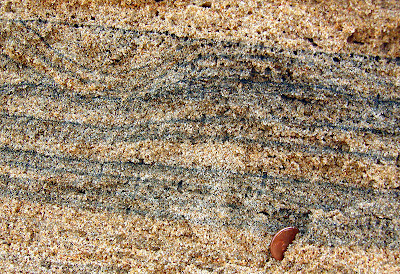 All lodestones are made of magnetite but not all magnetite is lodestone. All magnetite, and all lodestone, is composed of iron and oxygen, called iron oxide, but only lodestone is a natural permanent magnet. There are several different kinds of iron oxides, all made of iron and oxygen but with different atomic makeups and molecular structures. We will explore some of these differences in the next article in this series, on the mechanism of magnetism.

Magnetite, like iron and steel, is attracted to a magnetic field, but it does not stay magnetized itself. Only a small portion of magnetite is permanently magnetized as lodestone. For magnetite to turn into lodestone, it must have a particular crystalline structure and it must be mixed with another ferric oxide mineral called maghemite. No one is quite sure how lodestone achieves this special structure but one theory is that it is magnetized by strong magnetic fields surrounding lightning bolts. The fact that lodestone tends to be found scattered on the surface of Earth rather than buried deep supports this theory. You can read more about lodestone and modern testing that supports this theory here.

Of all the thousands of different minerals on Earth, lodestone is one of only two natural magnets. The other natural magnet is pyrrholite. It is an iron sulfide mineral that is only weakly magnetic. Lodestone itself is extremely rare as well. What if no one had discovered lodestone? Would we know as much about magnetism as we do?

Magnetism is a fairly simple behavior with complex variations. Find out what we know about the mechanism of magnetism in the next article in this series, "The Mechanisms of Magnetism."
Posted by Gale Martha at 2:45 PM