Quasars are the black hole giants of the universe lurking within active galaxies.


A quasar is a compact region in the center of an active galaxy surrounding a supermassive black hole. An active galaxy is a galaxy whose galactic center is a black hole that is accreting mass and spewing out radiation. A quasar's radius is thought to be between 10 and 10,000 times the radius of the black hole's event horizon and it is powered by the accretion disc that surrounds the black hole. It is the brightest and most powerful object in the universe. This is an artist's concept of what a growing quasar might look like. 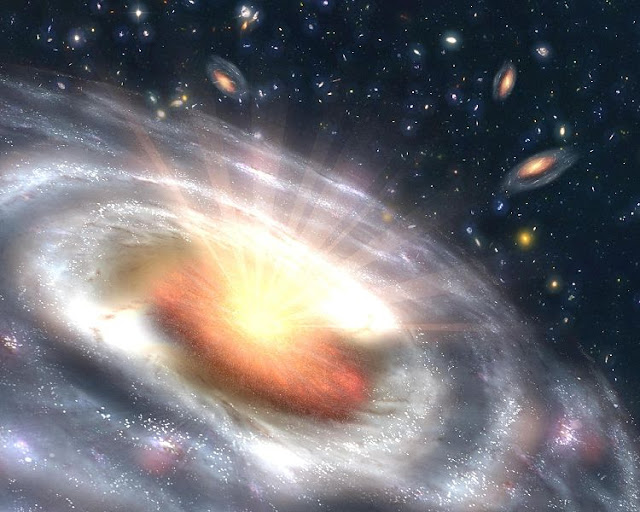 The quasar is the orange object in the center of a cloud of gas and dust that feeds a black hole which is not visible. The white rays are X-rays spewed from the accretion disc as it forms, radiated from the gas and dust as it becomes superheated.

Quasars tend to inhabit young galaxies (galaxies that still have lots of gas and dust to "feed" the black hole centered within) and can emit up to a thousand times the energy output of the entire Milky Way galaxy. About 200,000 quasars have been identified so far.

The first quasar was identified in 1963 by the astronomer Maarten Schmidt. He also determined that most quasars are extremely redshifted, placing them at distances of around 13 billion light years away. This means they are found only in the most remote, and therefore oldest, parts of the universe. The radiation emitted from quasars spans the full electromagnetic spectrum, from X-rays to the far infrared, peaking in the ultraviolet-optical range, making them bright to optical telescopes despite their incredible distance. This range of radiation indicates that the atoms within the quasar's accretion disc are not just extremely hot but highly irradiated as well; this distinguishes quasars from stars. The closest quasar is 3C 273, located in the constellation Virgo, a quasar visible with an amateur telescope. It has a mass of about 886 Suns and it sports a large visible jet (about 10% of quasars are endowed with one). It's relatively close, at 2.4 billion light years away. 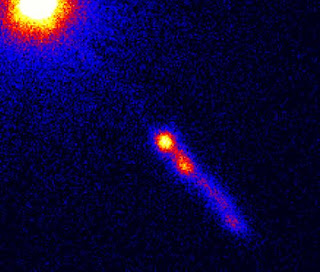 This is an X-ray image of how it looks through the Chandra X-ray observatory.

The radiation from a quasar is from outside the event horizon. It is energy created by the gravitational stress and friction of material accelerating toward the black hole. There are several nearby galaxies, ours included, that are centered on black holes but not quasars. Currently, most astrophysicists believe a black hole lies at the center of every large galaxy but only a small fraction of these black holes emit powerful radiation and are categorized as quasars as a result. A quasar may be ignited or re-ignited when a fresh source of matter falls toward a galactic black hole and creates a rotating accretion disk, as a result of the infalling material's angular momentum. A typical quasar consumes about 10 solar masses a year. The brightest known quasars consume 1000 solar masses a year. Some physicists predict a quasar will form when Andromeda galaxy eventually collides with our Milky Way, in about 4 billion years. When a quasar consumes all the nearby matter, its accretion disk dissolves and the active galaxy becomes an ordinary galaxy.

Microquasars are small cousins of quasars. Unlike galactic black holes, they are radio-emitting X-ray binary stars. They are named after quasars because they share some characteristics such as strong emission of radiation, often a pair of radio jets, and an accretion disk, although this disk can surround either a black hole or a neutron star, either of them being only a few solar masses. This compact mass object accretes mass from a rotating normal star. This is an artist's impression of the microquasar, SS 433.

Something changed in the universe over the last couple of billions of years so that quasars are generally no longer created. There were very few quasars during the first billion years of the universe but as many as thousands of times more quasars in the 2-billion year old universe compared to today, suggesting an epoch of quasar formation occurred just after the time the first stars (thought to be massive) formed. Some theorists suggest that the early universe contained a much higher percentage of matter in the form of neutral hydrogen and helium molecular gases than the universe does today. This matter rapidly fed primordial black holes created during one of the early universe's phase transitions, in particular the phase transition of light pseudo-Goldstone bosons. Clusters of accreting primordial black holes formed centers of dark matter condensation and as a result, supermassive black holes evolved, accompanied by early quasar activity.

Finally, we explore mysterious Worm Holes, next.
Posted by Gale Martha at 3:23 PM