Magnetars, like all neutron stars, are composed of matter that cannot be compressed any further without  collapsing into a black hole. These stars emit the most powerful magnetic fields in the universe, so powerful in fact that no one is sure how matter and energy behave inside them.

Like quark stars, magnetars are a special type of neutron star. I'd like to point out that these subtypes of neutron stars should best be thought of arbitrary points along a neutron star spectrum. Astronomers are discovering many stars that fit somewhere in between categories and they are in the process right now of coming up with new subcategories in which to catalogue the various radiation patterns they are observing from these stars. Unlike quark stars, magnetars are known to exist. In fact, several magnetars have been discovered, including this one by the not-so-pretty name, SGR 1900+14. 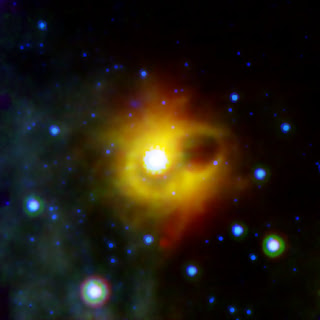 This image, courtesy of NASA, shows a ghostly ring seven light years across surrounding the magnetar (bright white). It is the remnant of a collapsed star, as all neutron stars are.


Magnetars, like all neutron stars, are composed of the densest matter known. They rotate rapidly as pulsars do (pulsars are discussed in the Neutron Star article) and their active life is short as well, in this case no more than about 10,000 years. The reason their lives are so short is because their strong magnetic fields rapidly slow their rotation, by about 1 second every 300 years. Eventually, a magnetar will no longer rotate fast enough to support any magnetic field. When this happens, the star cools and eventually it becomes dark dead rock of incredible mass. There may be 30 million or more of these massive dead lumps in the Milky Way.

The Whole Star Is a Magnet

Magnetars are so named because of their very powerful magnetic fields.  For example, SGR 1900+14 exhibits an enormous field strength of 1011 teslas. A magnet this strong located halfway between you and the Moon would erase all of your credit cards and suck your pens out of your pocket! A distance within 1000 km of this magnetar would be lethal because the water molecules in your body are actually magnetic dipoles and they would be attracted so strongly they would tear your tissues apart. Eeewww! Magnetars are the strongest known magnets in the universe.

This is an artist's conception of a typical magnetar with its magnetic field lines shown in red. Its actual magnetic field is far greater than these lines imply.


The Earth, the Sun, and in fact most stars and most of the Sun's planets have magnetic fields. The Sun's magnetic field, for example, extends beyond the furthest planets and protects them from extrasolar radiation. Earth's magnetic field protects all living things, as well as all of our electronic hardware, from solar radiation. We could not exist without it.  As important to us as Earth's magnetic field is, it is extremely insignificant compared to SGR 1900+14, about 10-7 teslas compared to 1011 teslas, respectively. A magnetic field this strong radically alters not only the star's matter but also the quantum vacuum around it (Scientific American "Magnetars" February 2003). Stars such as these ones can emit a million times more radiation than the Eddington limit allows (the concept of the Eddington limit is introduced in the article "Introduction to Stars"). This is the point at which a star's outward radiation pressure exceeds the force of gravitational attraction, and its mass simply blows away. Why doesn't this happen with magnetars? This is currently the focus of intense study. Researchers are trying to identify a magnetic version of the Eddington limit that might constrain a magnetar's magnetic field into a confined emission spike, as well as place a limit on the distance reached by its X-ray bursts. This could enable a more accurate measurement of the gravitational redshift of magnetars. It might also locate the emitting region at the magnetar's surface. This kind of study might tell us how the radiative bursts of magnetars work. A more technical but possible answer to this question is "magnetic fields greater than 1014 Gauss [this is roughly equivalent to 1011 teslas] reduce the Thompson cross section [remember Thompson scattering?] allowing bursts to exceed the Eddington limit by suppressing electron cross section and decreasing the scattering opacity. This allows higher fluxes to escape."

How Does a Magnetar Work?

Let's start with pulsars. These neutron stars spin rapidly and emit radio waves. Strong electric currents flowing deep within the star create magnetic poles from which radio waves are emitted. The magnetism of pulsars is very strong and this magnetism is for the most part explained by its compression. The original star's core collapsed by a factor of about 105 as the pulsar formed. For every time its radius is halved, its magnetic field strength quadruples. That means that pulsars should have a magnetic field strength about 1010 times stronger than that of the original star's core (all pulsars tend to have very similar radii as explained in the Neutron Star article). That works out to about 108 teslas for an average pulsar, an enormous magnetic field, but still many magnitudes smaller than that of a magnetar.

Most researchers believe that the initial rotational rate of the core determines whether it will become a pulsar or a magnetar. Within the collapsing core, superheated plasma circulates by convection. This plasma is very electrically conductive and it drags any magnetic field lines threading through it as it moves. This phenomenon, called dynamo action, can greatly magnify the magnetic field if the newly born neutron star is rotating fast enough. This is how it works:  Computer simulations demonstrate that the convective period of new neutron stars is about 10 milliseconds. All stars tend to give up about a tenth of their kinetic energy to the magnetic field as the furiously convective plasma drags along magnetic field lines.  If the newborn neutron star's rotational period is less than the convective period, it creates a dynamo effect that greatly magnifies its magnetic field. In this sense, newborn neutron stars that become pulsars rather than magnetars can be thought of as failed dynamos.

As the magnetic field blinks into life, it drives enormous electric currents outside the star. These currents generate powerful X-rays. The magnetic field also moves through the outer crust of the star and, as it does so, it stretches and distorts it. The crust eventually snaps back in what is called a starquake. This action releases a burst of soft gamma radiation. This action gives magnetars their name, soft gamma repeaters or SGR's.

Magnetic fields around magnetars exceed the quantum dynamic threshold. When this happens, "X-ray photons readily split into two or merge together. The vacuum itself is polarized, becoming strongly birefringent, like a calcite crystal. Atoms are deformed into long cylinders thinner than the quantum-relativistic wavelength of an electron" (Scientific American "Magnetars" February 2003).  Such extreme gravitational fields as well as electromagnetic fields created by magnetars wreck havoc with matter and energy. (I think this gives a hint as to how magnetars exceed the Eddington limit.)

Although we have some ideas about how magnetars come into being and how they work, they remain enveloped in a shroud of mystery. Like all neutron stars, the composition of the innermost core is a complete mystery. And, especially in the case of magnetars, the laws of physics themselves are pushed right to their limits, resulting in energies so extreme they are almost impossible to imagine.

Now that we've cut our teeth on magnetars, lets move on now to a phenomenon even more extreme, black holes.
Posted by Gale Martha at 1:26 PM