In Atoms Part 4B, we learned that atoms form covalent bonds by sharing electrons. They do this by overlapping their electron orbitals. We took a good look at orbitals in Atoms Part 4A: 1s, 2s, 2p, 3s, and so on. Now we're ready for some pretty interesting bond chemistry - hybridization.

Remember that orbitals are described by the angular momentum of the electron. They are part of the wave function of the electron and they are solutions to Schrodinger's equations for quantum mechanics. By overlapping orbitals, electrons from two atoms are combining their wave functions to get a new shared wave function.

All the electrons involved in creating a bond must be in the same energy state and this often means that some energy must be put into the system so that an electron can move into a higher energy (excited) state to match that of its bonding companions. Ultimately, however, the creation of a covalent bond significantly lowers the energy of the system and that drives the bonding process. Carbon-carbon bonding is most often used as an example of hybridization but many molecules use it. As we will see, carbon hybridizes s and p orbitals to make bonds, but other atoms use other orbitals. For example, iron-iron (Fe-Fe) bonds are hybridized d orbitals.

First, we'll look at how carbon atoms form a double bond, in ethylene for example. Each carbon atom must first form hybrid sp2 orbitals before it can bond. To bond with another carbon atom, a carbon atom modifies its 2s and 2p orbitals into three sp2 hybrid orbitals and one p orbital. This is the hybridization process in a nutshell. It happens all at once but in order to understand it, we'll have to break it down into steps.

First, note that the "2" in "sp2" no longer refers to the number of electrons in the orbital. Nor does it tell us about the energy of the orbital. It now represents the type of orbital instead. An sp3 orbital, involved in a single carbon-carbon bond, or an sp orbital involved in a triple carbon-carbon bond, each has a different shape than an sp2 orbital.

sp2 orbitals are special hybrid orbitals. They are a mixture of p (dumbbell shape) and s (sphere shape) orbitals, so they form a geometry that's in between the shapes of the two orbitals. In each about-to-bond carbon atom, three sp2 orbitals lie in a single plane with 120° angles between them. They look a bit like three lopsided dumbbells attached together at their middles, shown below left. 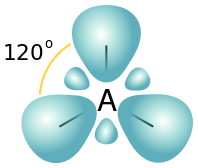 Remember from the previous article that carbon atoms have four valence electrons (1s2 2s2 2p2) for bonding. These three sp2 hybrid orbitals are formed from three unpaired electrons by combining one 2s orbital electron with two unpaired 2p suborbital electrons (2px and 2py). The third 2p suborbital is also involved. It lies perpendicular to this plane (into and out of the page in the figure left where A is, and is not shown in the diagram) and we'll get to it in a moment.

Each carbon atom ultimately needs three unpaired electrons all in same-energy orbitals to make the three hybrid orbitals. A carbon atom doesn't have enough unpaired 2 p electrons to make a hybrid bond because it only has two of them in this orbital (see below left), so the atom promotes one 2s electron into the 2pz suborbital, leaving the remaining 2s electron unpaired. The carbon atom is now in an excited state, below right:

Next, the lone electron orbitals hybridize into sp2 hybrids, shown below. How far up the boxes are on the page indicates what the orbital energy is, so the energy of each of the hybrid orbitals is in between that of the original 2s and 2p orbitals:

When the carbon atoms approach each other to make a double bond, one sp2 orbital from each atom overlaps with the other, forming what is called a sigma bond. There are different kinds of covalent bonds possible, based on orbital overlap, and the sigma bond is the strongest kind. Each of the other two sp2 orbitals forms a hybrid orbital with a hydrogen atom electron orbital. Each carbon atom, in other words, sigma bonds with two hydrogen atoms.

Now to the third p suborbital: Two 2pz suborbitals, one from each carbon atom, also overlap and they form a pi bond (perpendicular to the hybrid sp2 orbitals). It too is a covalent bond but it's a bit weaker than the sigma bond. The sp2 hybrid orbital overlap plus the 2pz suborbital overlap together make a double C=C bond. The 30-second video below will help you visualize how this process works:

Carbon atoms can also form single bonds as well as triple bonds with each other. The double carbon bond is a bit shorter than a single C-C bond (an sp3 hybrid bond), another bond you will often see in organic molecules. The triple C≡C bond (an sp hybrid bond) is shorter still. A shorter bond is a stronger bond.

A single C-C bond is an overlap of one of four sp3 orbitals formed by hybridizing a 2s electron and three 2p electrons (again, one 2s suborbital is promoted to a 2p position). All four bonding electrons form sigma bonds this time. One sp3 orbital from each carbon atom overlaps to form a sigma bond between them. That leaves three sp3 orbitals that can sigma bond with other atoms. In the case of ethane, C2H6, the other sigma bonds attach three hydrogen atoms each. There's no pi bond in a C-C bond, so this bond is a bit weaker than the double bond.

A triple carbon bond is made with six carbon-carbon bonding electrons, instead of two (C-C) or four (C=C). In this case, a sigma bond and two pi bonds do the bonding, and it's a bit stronger (and shorter) than the double bond thanks to the extra pi bond involved. A 2s electron is promoted and hybridizes with only one p orbital electron, forming two sp hybrid bonds, shown below: 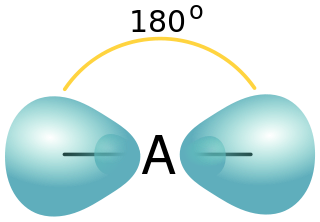 The other two p orbital electrons form two pi bonds. One sp bond from each carbon atom overlaps with the other one, forming a sigma bond. That leaves one hybrid sp orbital per each carbon atom free to overlap with another atom's electron orbital. In the case of ethyne, the other sp bond from each atom bonds a hydrogen to the molecule. While a single C-C bond can rotate about itself, the double and triple bonds cannot because p orbitals are bonded too and they have to stay aligned with each other. 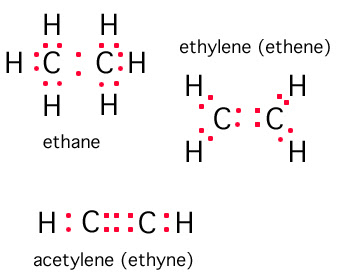 These diagrams offer a simple two-dimensional picture of the actual shape of these three-dimensional molecules. In each case, electrons pair up in bonds to form a very stable octet of valence electrons around each carbon atom nucleus (remember that all the bond electrons count toward each carbon atom's octet because they are shared).

Hybrid bonds give us a peek into what is really going on with an atom's electron configuration when it covalently bonds with another atom. It gives us a feel for the mechanics of how atoms share electron orbitals. We'll look at two particular kinds of covalent bonds - polar bonds and metallic bonds, two different takes on electron orbital sharing - in Atoms Part 4D, next.