The Sun Part 1: Evidence of A Violent Star

A suggestion before you begin: If you read the Atoms series in this blog (see to the right on this page) first, you will be especially well equipped to understand the Sun's mysteries.

There is a monster lurking in our solar system - the Sun. The image below was taken using NASA's Solar Dynamics Observatory (SDO). The surface isn't uniform. Bright spots, dark spots, filament-like structures and giant wisps and loops of material are visible. 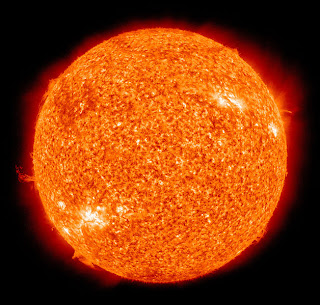 Don't let the orange colour fool you. This is a false-colour image of light captured in the extreme ultraviolet (invisible) region of the spectrum, where much of the sun's light output is concentrated. If you were to look at the Sun from space with your naked eye, it would be pure white, not yellow as we see it through Earth's atmosphere.

The Sun is the energy source for almost all life on Earth. Plants use the energy in sunlight to drive reactions that make carbohydrates and sugars from water and carbon dioxide, a process called photosynthesis. Plants form the base of almost every food chain in the world. Everything that eats plants or eats the organisms that eat plants ultimately receives the Sun's energy.

On a warm sunny day it is easy to imagine the Sun only as the benign life-giver that it is. 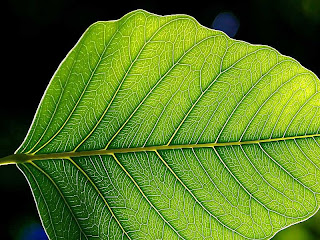 Inside every green leaf, for example, millions of tiny round green structures called chloroplasts (below) convert the Sun's energy into chemical bonds in molecules such as sugars.

This complex and elegant energy conversion process is called the Calvin cycle (below right). When the leaf is eaten and digested, chemical bonds are broken, releasing the energy that is needed to grow and live.


The Sun has two personalities. It is a life-giver and it is also a gigantic seething ongoing thermonuclear explosion constrained only by its own gravitational force. It continuously spews particles and radiation in every direction, a phenomenon understatedly called solar wind, shown in this two-minute video:


About every 11 years or so, our star grows even more violent. The image below is a montage of Yohkoh SXT (soft X-ray) images of the Sun taken over a ten year period (1991 to 2001). 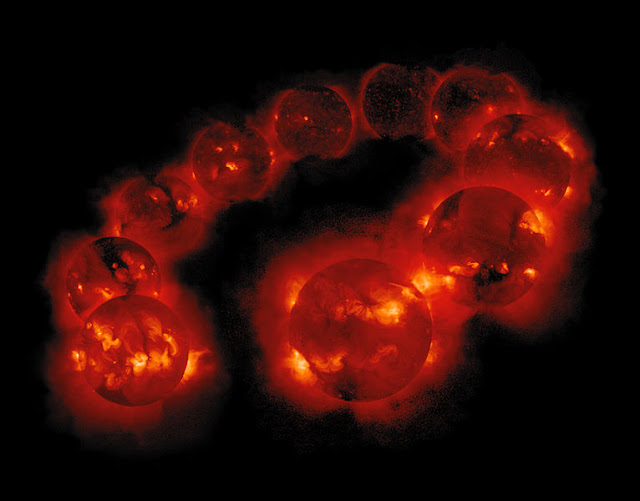 The image above highlights how widely solar activity varies during the solar cycle. The images in the middle of the horseshoe were taken during solar minimum.

Intense magnetic fields torture the Sun's surface, accelerating the particles that fly out from its surface to  almost light speed. During the maximum level of activity in the cycle, huge magnetic field lines twist and strain and explosively detach themselves. Magnetic field lines, calculated from 2010 data from the Helioseismic and Magnetic Imager (part of the SDO mission) are drawn over the Sun's image, below.

These magnetic field lines, like flows of magnetic force, erupt outward into space along with all the particles caught up in them. This is called a coronal mass ejection, or CME.

Solar flares, patches of sudden brightening over the Sun's surface, and the coronal mass ejections associated with them, are among the most violent explosions in the solar system, with forces up to 100,000,000 atomic bombs. These phenomena produce blasts of radiation across almost the entire electromagnetic spectrum, from radio waves to X-rays. Most of this radiation is invisible to the human eye, so special instruments are required to observe them. Flares tend to occur in active regions around sunspots (regions with intense magnetic fields), and coronal mass ejections tend to follow them.  The graph below tracks average sunspot activity from 1760 to 2000, showing a clear 11-year cyclic trend.
Although the graph above is a little dated, a maximum period is expected in 2013. We've already seen evidence of its approach.

Signs of increased activity came to Earth as early as July 14, 2012. You might recall some amazing footage of aurorae visible in the night sky as far south as California and Arkansas. Vivid multihued displays occurred here in Alberta as well.

This is an especially beautiful collage of aurorae shot last year in Russia by TSO Photography and set to music:


The Aurora from TSO Photography on Vimeo.

Below is an image taken in 2010 from the International Space Station, showing what an aurora looks like from space. 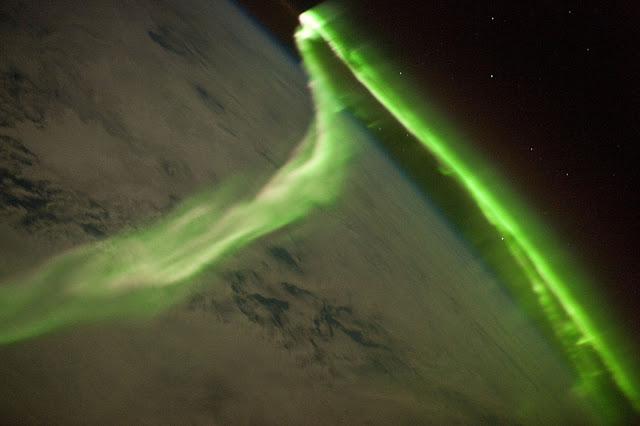 Although the light shows may seem as benign to us as sunlight itself, they betray just how violent solar storms are. Like the Sun, Earth is enveloped in a magnetic field. This field captures and accelerates plasma particles streaming from the Sun. They strike the atoms in Earth's upper atmosphere with so much force they glow. You can learn more about aurorae and where their colours come from in my article The Northern Lights.

I would just like to give you a general idea of the shape of Earth's magnetosphere. For the legend to the numbers, check the wiki webpage, where this image comes from. Notice that the magnetosphere billowing out from the magnetic poles of the Earth follows the shape you might expect of magnetic field lines around a bar magnet (shown below), which is what Earth and the Sun are - gigantic bar magnets. 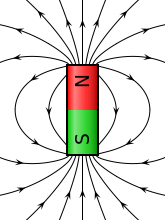 If it were not for Earth's magnetic field, not only solar flares and CME's but even continuous less violent solar wind would be deadly to most living organisms. Earth's atmosphere would eventually be stripped away by solar wind leaving the surface to be bombarded with radiation, much of which is ultraviolet radiation. This radiation disrupts the chemical bonds in most organic molecules (molecules of life), especially DNA.

Even with natural magnetospheric protection, Earth's technology has never been more vulnerable. Last July, a roiling tangled net of magnetism more than fifteen times larger than Earth hurled a billion tons of seething plasma (a CME) at our planet (we will explore this plasma in the next article). This 4-minute NASA video describes the storm (and includes some extraordinary auroras seen then):

This geomagnetic storm, triggered by a CME, hammered Earth's magnetic field, pressing it down so close to the surface that some satellites were temporarily naked to the damaging plasma. The magnetic field protecting Earth reverberated like a trampoline, sending electric currents through the soil and making compass needles swing. Although no damage was done, a solar storm like this one is capable of creating radio blackouts, disrupting jet travel, causing widespread damage to power grids and disrupting all satellite and GPS communication, described in this 3-minute video:

Anything with digital components is vulnerable to the kind of electrical disruption that a large solar storm can cause, making every technologically advanced country vulnerable to widespread disruption of almost every major system from transportation to security to healthcare, requiring weeks to months to repair and replace damaged components such as transformers. Meanwhile, entire continents could be hurled back to a time before electricity was available. NASA offers an excellent, brief and sobering description of what could be in store for us in the case of such an event. Although the current solar maximum, which should arrive in August 2013, is forecast to be one of the weakest on record, it's a good reminder to be prepared.

How does the Sun generate such intense life-giving and life-threatening power? To answer this question we'll need to look deep inside the Sun, next, In The Sun Part 2.
Posted by Gale Martha at 1:29 PM

Email ThisBlogThis!Share to TwitterShare to FacebookShare to Pinterest
Labels: The Sun