Lightning is a source of endless wonder. 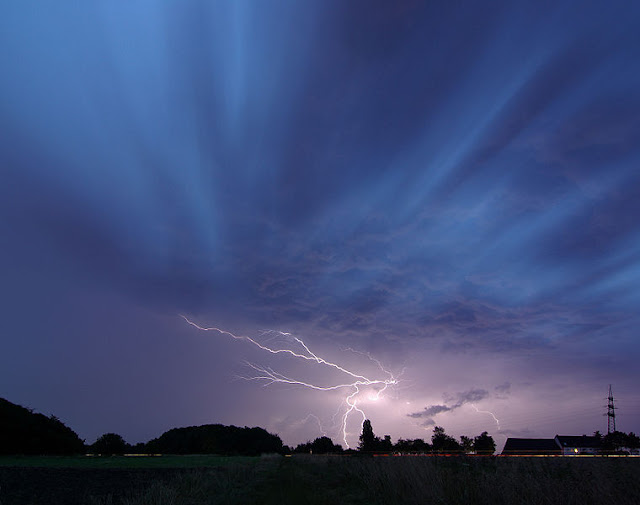 It has been studied scientifically for centuries and yet mysteries about the mechanism of lightning remain. This makes lightning a fascinating tool we can use to explore the ins and outs of how electricity originates from the movement of subatomic particles called electrons. This subject extends quite well from the "Atoms" series in Scientific Explorer (scroll down on the right to access these articles).

Where Does Lightning Come From?

In order to understand lightning we need to start at the very beginning of a thunderstorm. To predict one, meteorologists look for three key ingredients: warm moist air, an unstable air mass and something that will trigger a rapid movement of air upward. This trigger could be an uplift of air over mountains, converging winds, or an uplifting weather front. Daytime heating tends to trigger upward air movement so most, but not all, storms occur in the late afternoon or evening.

Why is upward-moving warm moist air important? Atmospheric temperatures get colder as one travels upward. As temperatures change, materials tend to undergo a physical change, a process called phase transition. You already know this process when it comes to water: When ice is placed in a pot over high heat, it melts into water and eventually evaporates into steam. The energy of the water molecules themselves, called enthalpy, increases as water is heated, as shown in the diagram below left. 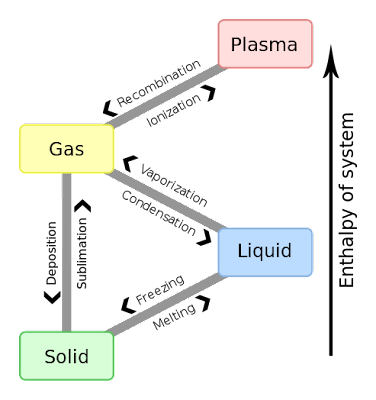 This process happens not just with water, but with many other compound materials and every elemental material as well. Even gold, which we know as a solid, melts and, if it's hot enough, evaporates into a gas. If you are curious, Wikipedia makes it easy to compare the temperatures at which various materials melt into liquid and evaporate into gas. Just look at the right-hand side of the element's page. For example, you'll see that gold melts at 1064°C and evaporates into gas at its boiling point, 5173°C. That's much hotter than lava, which is usually around 1000°C. Water can exist as liquid (water droplets), solid (ice pellets, hail, sleet, snow) and as gas (water vapour) in air.

When warm moist air lifts upward, it cools and the water vapour in it begins to condense into tiny droplets as the air reaches its dew point. The graph below right compares dew point temperature with air temperature and humidity.

Dew point is a good storm indicator. Warm air with a high dew point means it's humid and it has a lot of water molecules in it. Humid air is an essential ingredient in building up a thunderstorm. As this air rises, the water in it condenses and it releases energy, called enthalpy of vapourization. This energy allows the water droplets condensing out in an air pocket to cool less than the surrounding air, and this means the droplets can rise even higher. The water condensation process adds energy to a building thundercloud.

As air is swept high up in a thundercloud, the temperature can drop so fast that water vapour can change directly into tiny ice pellets, a process called deposition. This contributes even more energy to the growing storm cloud, because it releases additional energy - enthalpy of vapourization and enthalpy of fusion (the energy released when a water molecule freezes).

Gravity causes the ice pellets to fall. When they do, they collide with and sometimes stick to other pellets, growing in size on the way down. Water drops and ice pellets are carried upward in pockets of rising air and downward by gravity. This up and down raindrop/pellet motion marks the moment when the lightning-making machinery switches on. High humidity means there are lots of these drops and pellets moving in the air.

Not all lightning storms may involve the movement of ice pellets. Water droplet motion alone may be sufficient. Some researchers believe that ice formation is essential while others are not as certain. Most researchers, however, agree that the up/down motion is required to form lightning. The lifecycle of a typical thunderstorm is shown below. 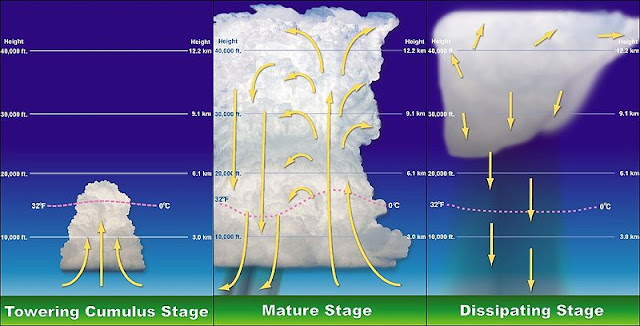 The mature stage, above center, is marked by turbulence created by updrafts and downdrafts, resulting in winds, severe downpours and lightning. Next, we'll explore how water and ice movement in a thundercloud make lightning, in Lightning Part 2: Lightning Is Electricity.
Posted by Gale Martha at 2:04 PM

Email ThisBlogThis!Share to TwitterShare to FacebookShare to Pinterest
Labels: LIghtning