Radiation: What is Happening in Japan? 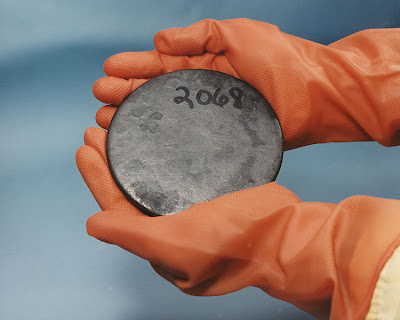 For a continuously updated reactor-by-reactor status  report on the 6 Fukushima reactors refer to this link. Three of these reactors are at  INES level 5 (out of a possible 7 with Chernobyl being a 7) as of March 21, 2011. Some nuclear authorities have labeled them level 6. Click on the INES link to find out what this means in terms of current threat level.
Before I discuss what is known so far about the Fukushima nuclear accident, I recommend that you take a look at what happened at Three Mile Island. You will find some of what happened there eerily similar to what is happening now. In the Japanese nuclear reactors at the Fukushima nuclear plant, the control rods automatically lowered into the fuel bundles to stop the reaction soon after the earthquake struck, a process called an emergency shutdown. The problem is that the rods were extremely hot when the reaction was stopped and the residual 6% reaction rate continued to heat the water. The fuel rods are housed in zirconium. This metal is used because it doesn't normally react with water and it doesn't absorb neutrons so it doesn't impede the reactions. The plant lost electrical power when the tsunami swamped it several minutes later. And, somehow, backup power was also lost. Without power, the plant couldn't continue to automatically keep the water tanks in the core filled. In the core, water is continuously lost to steam, from the heat given off by the decay reactions. As the core heated up to about 2200 F, the zirconium housing began to chemically react with the water that was left to produce zirconium oxide and hydrogen gas. This reaction is exothermic so it contributed even more heat to the core. The pressure of hydrogen gas increased until it explosively blew the reactor container apart, further destabilizing the reactor and making it even more difficult to keep the fuel rods under water and preventing them from melting. This CNN video explains that three separate safety systems unexpectedly failed at these reactors which resulted in catastrophe.
As the zirconium housing deteriorates, the fuel rods can leak. The pellets in these rods are not metal, they are a compressed powder of uranium oxide, so the rods per say don't melt. This is not good news though. Some of the gas products of the fission reaction are radioactive xenon and radioactive krypton. These gases normally accumulate inside the rods, but once the rods are compromised, they can escape into the reactor building. They are heavier than air so they will sink to the bottom of the building and if it's airtight they won't get out. Some uranium compounds will also escape but these are also very heavy and they will not disperse much unless there is an explosion or fire. The most dangerous by-products are the radioactive isotopes iodine-131, cesium-137 and strontium-90. They are lighter and can disperse into the atmosphere, with strontium-90 being slightly heavier and less dispersible than the other two. As mentioned, in the beta radiation section of this article, iodine-131 can be taken up and concentrated in the thyroid gland where it can damage cells and possibly lead to thyroid cancer. Cesium-137, with a half-life of around 30 years, can be mistaken for potassium inside living organisms and passed up the food chain and concentrated, all the while emitting ionizing radiation. Cesium detectors are usually used to assess how much radiation is leaking from a reactor. Strontium-90, also with a half-life of about 30 years, is less volatile than the other two isotopes but it is especially dangerous because it mimics calcium in people and animals, so it is taken up by and deposited in bones, destroying rapidly dividing bone marrow cells and potentially causing cancer. The hydrogen explosions serve to disperse the radioactive materials into the air. Technicians have attempted to add boron to the coolant water because it absorbs free neutrons and slows the reaction rate. If the core can't be cooled down, eventually, the powdery fuel and its reaction products, along with what is left of the zirconium housing, will melt into a lava-like soup called corium. Very thick steel on the reactor bottom will dissipate much of the heat from the mixture, but if nothing is done to cool the mixture, the steel will melt and it will all come into contact with the thick concrete housing below. The concrete might hold. If it doesn't the mass will eventually disperse in the ground below, the heat will slowly dissipate, and the nuclear reaction will slow to a stop.
No one can predict how much radioactive material will be dispersed from the Japanese reactors. It's also very difficult to predict exactly what materials will be dispersed because there are so many possible chemical reaction products and fission by-products, each of the latter possibly emitting beta, gamma and/or alpha radiation. Neutron radiation is another significant hazard from a reactor that is no longer properly shielded, along with the various radioactive isotopes this radiation can induce.
Health risks are also very difficult to assess in the population nearby in Fukushima prefecture because air-born radiation will travel along prevailing winds with radioactive particles deposited via raindrops, snow or dust along the way onto water reservoirs, crops, animals and people. The Japanese earthquake and tsunami disaster is already documented and being constantly updated here at Wikipedia.
I am horrified, as is everyone, by the unfolding disaster in Japan. I believe we are deeply indebted to the people there who are, unfortunately, teaching us how to endure and how to prevent future disasters, perhaps through better education, more active public involvement and better nuclear plant design.

Finally, I have two videos so share with you that are frightening to watch but valuable as an informative guide to the dangers of nuclear energy that we should all be aware of.

The first one is 6 minutes long, from RT News Station and it aired on March 17, 2011. It's an assessment of the current state of the 6 nuclear reactors in the Fukushima power plant and what might be happening right now:


This next video is called Inside Chernobyl's Sarcophagus. It's a followup on the 1991 NOVA documentary called Suicide Mission To Chernobyl and it's 46 minutes long. Well worth a viewing to compare what is going on how in Japan with what is considered the worst nuclear accident in history.
Posted by Gale Martha at 6:48 PM

Email ThisBlogThis!Share to TwitterShare to FacebookShare to Pinterest
Labels: Science In The News