The early hadron-filled universe now becomes rich with the electron residue from lepton/antilepton annihilation and the decay of unstable massive leptons, all of which exist in a seething broth of high-energy photons.


The universe is one second old. It is about a thousand times the size of our solar system and it is filled with the hadron residue that survived the hadron/antihadron annihilation of the previous epoch, as well as leptons, antileptons and gamma photons.

Leptons include the familiar electron, one or more of which exist as part of every neutral atom. Below is a Bohr model of an oxygen atom. The pink nucleus contains eight protons and eight neutrons. Eight electrons orbit the nucleus. 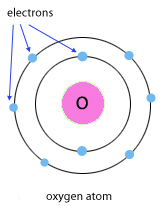 Electrons will not exist as stable particles until the universe cools further, marking the end of this epoch. Right now, electrons and positrons exist in equilibrium with gamma photons, meaning that the universe is seething with electron/positron annihilations. You can actually "see" these annihilation bursts in this one-minute clipping from "Through the Wormhole episode 7:"

A radiation source of positrons is placed in a bubble chamber filled with superheated liquid. Each positron that is released annihilates with an electron in the liquid, releasing two gamma photons that briefly ionize a surrounding bubble of atoms in the liquid. The bright light of this ionization bubble makes the annihilation event visible.

The Feynman diagram below shows how an electron and a positron approach each other and annihilate, releasing two gamma (γ) photons. 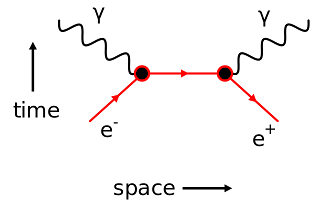 Until the end of this epoch, the reaction above runs both directions. Gamma photons create positron/electron pairs as fast as these pairs annihilate into gamma photons. (You might have noticed that time runs backward for the positron in the Feynman diagram. I explore this further in my article, "The Behaviour of Light." Scroll down to the section, "Photons Live In Spacetime.")

There are many different kinds of leptons and they fall into two general groups: charged leptons with mass such as electrons, muons and taus, and neutral leptons such as neutrinos, which have a very small, if any, mass. The table below, clipped from the Wikipedia page on leptons, compares the mass and charge of the leptons. 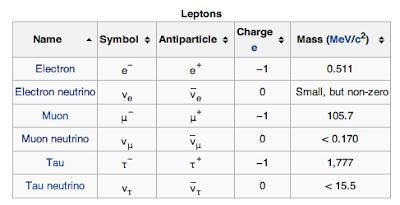 In the current universe, at ordinary energies, only electrons as well as electron, muon and tau neutrinos exist and are stable. However, at very high energies, such as those which the lepton-epoch universe experienced, much more massive and unstable leptons existed as well, such as muon and the tau particles. These particles are called second and third generation leptons. Today, they can be observed only for tiny fractions of a second in the very high energy environments of particle colliders. Each of these particles is believed to exist along with its antiparticle twin for a few seconds during this epoch. These particles quickly decay (through the weak force) into lighter electrons and positrons, neutrinos and antineutrinos. The tau lepton is massive enough that it also decays into quarks as well; one tau decays into one down quark and one up antiquark, as well as a slew of other particles.

The universe is hot enough to support the creation of lepton/antilepton pairs until it is about ten seconds old. At this point, most of these pairs are annihilated, leaving a small residue of leptons (the question of why a residue of matter over antimatter remains a bit of a mystery and is discussed in the previous Hadron Epoch article). Electrons have the least mass of all the charged leptons. Unstable and massive muons and taus also form in this energetic buzzing epoch, and they begin to decay with a corresponding release of energy into a much lower energy state, into (very stable) electrons.

This online timescale of creation offers an excellent timeline diagram that sums up the birth of particles in the universe. It's a good reference for all the epochs I have covered so far.

The universe is ten seconds old as the Lepton epoch ends. It contains both hadrons and leptons, but no atoms yet. It is still far too energetic for even atomic nuclei to form. The universe is also brimming with high-energy gamma photons that were created during the hadron and lepton annihilation events.

Next, The Photon Epoch.
Posted by Gale Martha at 2:26 PM