As the young universe continues to expand and cool, the first atomic nuclei explode into existence in a universal fusion reaction.

The universe is about ten seconds old. It contains hadrons (protons and neutrons) as well as leptons, but it is still too energetic for atomic nuclei (protons and neutrons) to bind. The annihilation of hadron and lepton particle/antiparticle pairs contributed a tremendous number of extremely energetic gamma photons to the universe. These annihilation events are now all but over, leaving a residue of matter over antimatter. These events are explored in a previous article, "Hadron Epoch." Gamma photons now dominate the photon epoch universe. The photon epoch universe is a seething plasma of free electrons, protons and neutrons. Photons are constantly slamming into other particles, usually free electrons, and interacting with them. This collision creates an effect called Thomson scattering. When a photon strikes an energetic electron, the electric and magnetic components of the photon exert a special force called the Lorentz force on the electron. This force accelerates the electron and causes it to vibrate. This vibration sets up a new electromagnetic oscillation, which means the electron emits a new photon in a new direction. During this epoch, photons are continuously scattering off electrons in all directions and it means that the universe, for now, is opaque because photons can't stream. There is light during this epoch but it is not the kind of light you could see through a telescope. Instead, matter and radiation behave as a fluid called the photon baryon fluid. The universe will continue to cool and expand, and at about a minute old it will have cooled enough to allow the first nuclei larger than a single proton to form. This begins the process of Big Bang nucleosynthesis and it will continue for only about three minutes.

The smallest and simplest nuclei are hydrogen-1 nuclei. These are simply free protons and they have been present ever since stable hadrons began to form during the hadron epoch.  Right now, deuterium and helium nuclei are beginning to form during a two-step process, called a proton-proton chain reaction. As shown in the diagram below, two protons (1H) fuse into a deuterium (2H) nucleus. A positron and a neutrino are released as one of the protons changes into a neutron. A deuterium nucleus fuses with another proton, releasing a gamma photon, and forming a helium-3 nucleus. Two helium-3 nuclei fuse into a helium-4 nucleus, releasing two protons in the process. 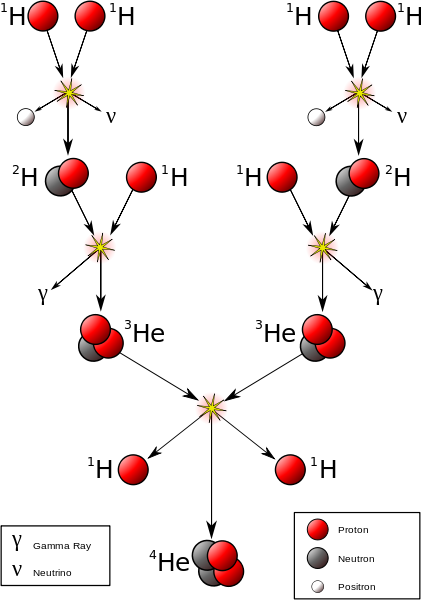 This is the same fusion reaction that happens in the Sun, converting hydrogen into helium.

Deuterium, or hydrogen-2, has a nucleus composed of one proton and one neutron. It is also stable. A helium nucleus is a very stable tightly bound arrangement of two protons and two neutrons. Free protons and neutrons are highly motivated to form a helium nucleus because it is so stable, representing a lower possible energy state. However, the production of a helium nucleus requires an intermediate step of making two deuterium nuclei. This can only happen when the energy of universe falls to a level where deuterium formation is favoured over dissolution back into free protons, and it is called the deuterium bottleneck. Once deuterium nuclei are able to form, a sudden burst of fusion occurs, creating lots of helium-4 nuclei, along with some helium-3 (a stable light form of helium with two protons and one neutron) nuclei and lithium-7 nuclei (with three protons and four neutrons). The universe is one huge fusion reactor for about two minutes. As this reaction burns out, the universe is left with all the hydrogen-1 it will ever have and almost all the helium-4 it will ever have as well. Relatively little more helium will be fused from hydrogen inside future stars.

In addition to these stable hydrogen-1, deuterium, helium-3,  helium-4 and lithium-7 nuclei, tritium (hydrogen-3) and beryllium-7 nuclei are also created but these will either quickly decay or fuse with other nuclei to create stable isotopes. The largest stable element created is lithium-7, but very little lithium is created before all free neutrons are bound up inside smaller nuclei, about three minutes after the Big Bang. About 20 minutes after the Big Bang, the energy of the universe becomes too low to allow nuclear fusion to continue. The nuclei of only three stable elements (elements 1, 2 and 3 below) are formed during this epoch. No larger nuclei exist yet. 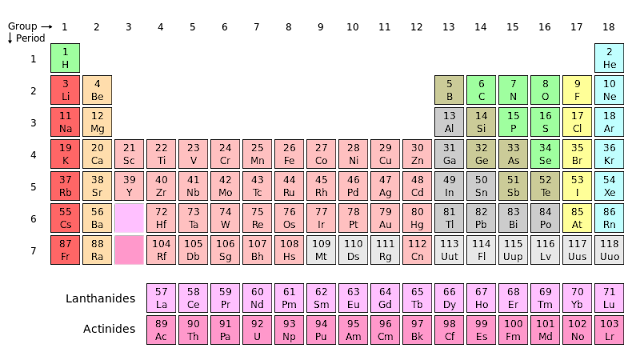 A few minutes old, the universe contains about 75% H1, 25% Helium-4 and about 0.01% deuterium as well as trace amounts of lithium and beryllium nuclei (by mass). Much later on, as stars form, hydrogen will fuse into helium, and to a far less extent, helium and other light elements will fuse as well, but that will not change this ratio very much. Only about one percent of the original hydrogen and helium created during Big Bang nucleogenesis has been burned inside stars during the 14 billion years since the Big Bang. The universe will continue to expand and cool for another 379,000 years before the first stable atoms begin to appear. Only then will free electrons will be of low enough energy to be captured by positively charge nuclei, creating the first atoms of matter.

It will take as long as 500 million years after the first atom appears before the first stars form. They will be the furnaces in which all the larger nuclei come into existence. I explore how all the atoms formed in the article, "How Atoms Are Made."

Next: The Decoupling Epoch.
Posted by Gale Martha at 5:34 PM