How To Prove Which Theory for Dark Energy Is Correct?

The existence of this mysterious energy is fairly well established in the scientific world. However, is the constant nature of vacuum energy or a dynamically changing scalar field behind the wheel (or both or neither)? The ultimate fate of the universe hinges on which theory is correct. The cosmological constant suggests that the universe will continue to expand at an ever-increasing rate until it basically freezes to death. The universe will continue to cool as it expands and, eventually, gas clouds will be too diffuse to ignite star formation. Stars will eventually burn out, and black holes will slowly evaporate through Hawking radiation. Even stellar remnants may disappear if the proton itself is unstable. Temperatures will approach a uniform quantum minimal value and no thermodynamic work will be possible.

In the quintessence theory, the rate of expansion of the universe might either slow down or even stop at which point it will begin to collapse as the scalar field dissipates and gravity takes over as the dominant force. Or, it may continue to expand at a rate that may vary with time. Different categories of quintessence theory offer different scalar field dynamics, and therefore, a wide range of possible fates.

In the cosmological constant theory, the energy density of dark energy remains constant throughout time. In quintessence, the energy density of dark energy not only changes with time but it might vary spatially as well. The quintessence scalar field couples to a trace of the energy-momentum tensor, which means it couples gravitationally with matter, so you might expect spatial perturbations to grow in the scalar field because of its interaction with matter as it clusters into galaxies and super clusters, etc. Would these spatial perturbations leave an imprint on the CMB (cosmic microwave background) and on the large-scale structures themselves, one that could be measured and attributed to quintessence? Physical computer models for the different categories of quintessence are being separated into different scenarios for the evolving universe. These tests will rule out some less likely versions of quintessence and they might even rule out the cosmological constant theory as well.

A third and fascinating possibility is that the scalar field of quintessence might simply be a scalar addition to the rank-2 tensor description of general relativity laid out by Einstein, meaning that it is not a new energy field in itself but instead a refinement of the theory of gravity.

To figure out which of these possibilities might be true, NASA planned to launch a future investigation into the nature of dark energy, called the Joint Dark Energy Mission (JDEM), in partnership with the U.S. Department of Energy. This idea was scrapped and rolled into a new project called Wide Field Infrared Survey Telescope (WFIRST), which has top priority. Wikipedia lists its possible launch date at around 2023. The design is based on the JDEM proposal. It will not only attempt to detect the nature of dark energy but it will also search for extra-solar planets (a new field of cosmology that is absolutely exploding right now). A telescope in deep space orbit, shown below as a digital rendering, should be able to measure thousands of Type 1a supernovae every year it operates, as well as very distant galaxies, many of which are far too distant to measure accurately from closer to Earth.

WFIRST will use three techniques to try to answer questions about the nature of dark energy - many more Type 1a supernova distances (and with greater precision), more precise measurements of baryon acoustic oscillations, and measurements of weak gravitational lensing. These sets of data will help to paint a picture of what dark energy is doing to the evolution of the universe, and that will help physicists figure out what it is.

Type 1a supernova distances and baryon acoustic oscillations are two lines of evidence that dark energy exists. These were explored in detail in Dark Energy Parts 8, 9 and 10. I didn't mention weak gravitational lensing as evidence because it is not evidence so much as a way to probe the expansion history of the universe, and the way it will do it is very cool.

Gravitational lensing happens when the trajectory of photons bends as it passes near a mass. Spacetime around a mass is curved, so light, propagating through spacetime is bent as it follows that curvature. Many cases of gravitational lensing have been observed, and they offer proof for Einstein's theory of general relativity. Observations of multiple images of a single galaxy, for example, demonstrate gravitational lensing, as shown below in this NASA diagram. 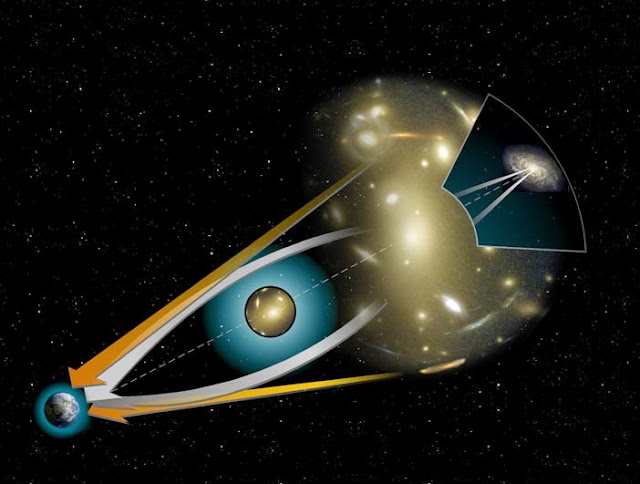 Less often the lens alignment produces a ring-shaped mirage, shown in the NASA image below. 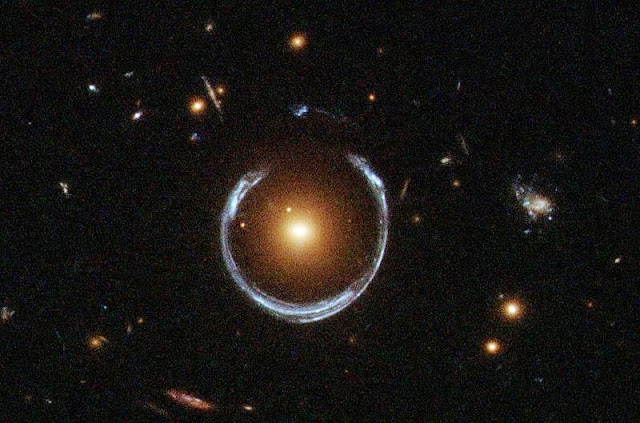 The gravity of a luminous red galaxy is bending the light from a more distant blue galaxy, distorting the image of the blue galaxy into a horseshoe. This image was taken by Hubble's Wide Field Camera 3. WFIRST might use two telescopes similar in design to the Hubble Space Telescope, but with an even wider (and much deeper) field of view. The WFIRST telescope rendering shown far above looks very much like the Hubble telescope, which is still functioning.

Most gravitational lensing is so subtle that it is impossible to detect in a single background source. These cases are called weak gravitational lenses, and this is what the new telescope will focus on. Multiple wide arrays of galaxies will be imaged and statistics will be used to measure two kinds of transformation due to gravitational lensing - convergence and cosmic shear. Convergence increases or decreases the objects image size and shear stretches the object image tangentially around the mass in the foreground that is doing the lensing. Examples are shown in the diagram below right. The solid green circles are the true shape and size of the object while the black outlines show the effects of convergence (top; K) and shear (Re[γ] and Im[γ].

Many galaxies must be observed in order to get statistical results. Galaxies tend to be naturally elliptical so their true shape is difficult to separate from shear effects. Instrumental effects can also smear images slightly. This telescope will be far from Earth's atmosphere so noise that can look like shear and convergence will be eliminated. To observe the effects of dark energy, these observations will be separated into groups of different redshifts. Low redshift groups will only be lensed by relatively close objects and high redshift groups will be lensed by by a wide range of objects. This technique, called cosmic tomography (taking consecutive slices of space), makes it possible to make a 3-dimensional map of the mass distribution in the universe that not only tells researchers how it's distributed today but also how that distribution evolved over time, offering a detailed expansion history of the universe.

This much larger set of very precise observational data will hopefully hint at which kind of dark energy scenario the universe is actually playing out. What will happen in the end? Explore the possibilities in the final article in this series,  Dark Energy Part 14.
Posted by Gale Martha at 9:09 AM